Posted on August 21, 2020 by fortifiedbritain 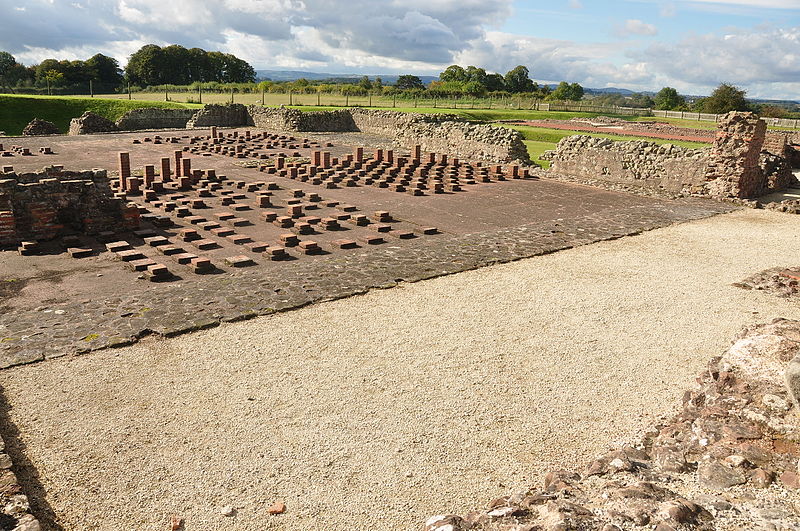 Located in Shropshire, this once bustling Roman town was the fourth largest in Roman Britannia, once covering around 63 ha, it was originally built as a fort which housed 500 troops and was a major site of importance being located on Watling Street, and only 25 km from the Welsh border. It lay within the tribal lands of the Cornovii. It now lies asleep and mostly buried and has only revealed a fraction of its amazing history.

The site included a granary at the north gate, a temple located within the area of the Forum and at the western side there was an annex. Originally a civilian settlement grew up at the southern area of the fort. The site was first mentioned by Ptolemy as the city of the Cornovii.

When the army left the site became a major town. The main thoroughfare was situated NW – SE, and the town was divided into distinct areas. It was defended by a wall and a double ditch, and its water source came via the Wroxeter Aqueduct – an engineering marvel – which was fed from Bell Brook located just ¾ mile form the town. The aqueduct measured 0.9 m deep, and 2.4 m wide, was lined with clay, and it is estimated that it bought around 2,000,000 tons of water a day to the town. At its height it is estimated that the population was over 15,000.

Here is a short timeline of the site….

90 AD                Legions left and the town was established. It was the tribal center for the Cornovii people. It included 48 town blocks, included a Forum. The Bath House was incomplete.

2nd Century         Recorded by Ptolemy in his Geography.

4th Century         The defences were refurbished and enlarged to include a double ditch.

1850’s               A colonnade of square based columns were uncovered north of the Forum. Henry Dryden and Charles Roach-Smith recorded remains which had recently been uncovered.

19th Century       The first Roman site in Britain which was opened to the public with a permanent custodian in residence.

1947                 The Ministry of Public Buildings and Works acquired the Bath House site from the Shropshire Archaeological Society.

As you can see the site has had an amazing history – one which continues toady and will continue to do so into the future as more and more of the site is investigated and its secrets are revealed!

Make sure you keep up to date with all of your archaeology news at Heritage Daily!

Melrose. R. 2016. Religion in Britain from the Megaliths to Arthur: An Archaeological and Mythological Exploration. McFarland.

Wright. T. 1859. The Ruins of the Roman City of Uriconium, at Wroxeter, Near Shrewsbury. J. O. Sandford.