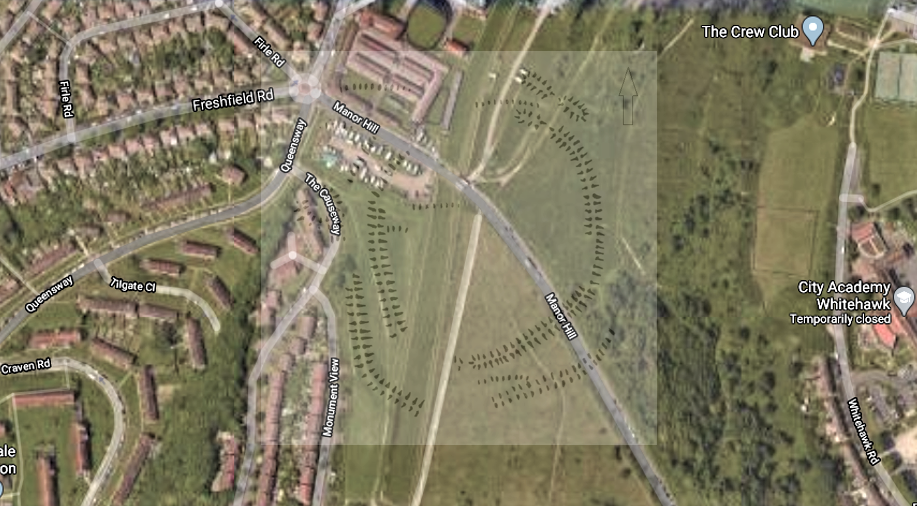 The camp consists of ‘4 rings of banks and ditches interrupted by multiple causeways’ (Orange et al 2015), but a lot of the site has been destroyed through building work, including the Brighton Racecourse and a housing estate. The site was first mentioned in 1587 and since then has had quite a bit of interest.

Through excavation as the site it is believed that occupation commenced at around 3,650 BC but was only occupied for between 155-230 years.

1929 – Excavated by E. Cecil Curwen with the Brighton and Hove Archaeological Club.

1935 – Rescue Excavation by the students of Sir Mortimer Wheeler (known as the father of British Archaeology). A road was built across part of the site.

1991-1993 – Excavated in preparation for the housing estate on the west side.

The excavations have thrown up some wonderful finds. Flint saws demonstrate that there was cutting of bone undertaken at the site, possibly for cutting through animal bone. In the ditches produced animal bones, stone tools (lithics) and potsherds, an incised chunk of chalk (art?), but the most interesting are the 4 burials uncovered.

One was of an eight-year-old, another was a woman and a newborn child, indicating that she possibly died in childbirth, and her child died with her. Other human remains were also found. ‘Other things deposited, such as potsherds, and stone artefacts may stand for social interaction and relations with neighbours and allies, on the one hand, and the very fact of contemporary domestic existence on the other’ (Whittle 2003).

So, what is the story behind Neolithic Causewayed Enclosures? Read on…..

Neolithic causewayed enclosures have been given a time period from approximately 3800 to 3600 BC (Cardiff University N.D.) when agriculture was beginning to take root (excuse the pun!) and settlements were beginning to make their appearance throughout the landscape. The Hunter-gatherer lifestyle was still being used, but people were also settling down and starting to own land, ‘during the course of the third millennium BC, each of the expressions of society of which we have archaeological evidence underwent profound changes’ (Thomas 1987: 426). Termed in general as the ‘Neolithic Revolution’ the changes occurring were that ‘farmers came and changed the world, shaped it in their own image….’ (Oliver 2011: 89).

With settlement possibly came areas of dense population, especially where fertile and rich growing soil was to be found, and ‘….changes were not just merely economic, nor did they rate purely to the representation of society in ritual, indicates that the whole character of social reproduction had changed’ (Thomas 1987: 426). The whole locus of an area would have been made up of people who had decided to settle, possibly had the same belief structure, and may have come together, from time to time, to assist each other, ‘members of a community are dependent on the work force as a whole and on the fruits of their labour’ (Bradley & Hodder 1979: 94).

Causewayed enclosures were one of the changes that began to appear within the landscape and were only constructed over a short period of time, in the scheme of things. Thomas tells us that

In most parts of Britain some centuries separated the start of the Neolithic and the building of the first causewayed enclosures. Possibly, enclosures simply represented a ‘fashion’ that spread across the island…. Driven by the imperative to emulate successful communities and their continental connections (Thomas 2013: 229).

Could they have been merely a ‘fashion’, or could their distribution be assigned to specific areas; possibly those ‘areas of denser settlement’ (Bradley & Hodder 1979: 95). Could this have been the result of the dramatic shifts in society previously mentioned, and did the new settlers now have to defend the land they had chosen to farm from the hunter-gatherers who still undertook their nomadic lifestyle? One fact is notable though, causewayed enclosures ‘….are rare or absent in most of northern Britain. Regional differences in social organisation may lie behind this’ (Darvill 1996: 34). Identified mainly

South and east of a line from the Severn to the Wash, though a few related sites have been recognised in the past 30 years in north Wales and Northern Ireland (Harding 2012: 153).

Regional differences (Darvill 1996: 34) may be the answer to this, but again we may never really know for sure.

Some suggest that causewayed camps may have been defended but can this be categorically proven? ‘There is a problem for siege sites of all dates, where substantial numbers of projectiles are likely to have been deposited by mechanisms other than combat’ (Foard & Morris 2012: 41). As with the Australian Indigenous People who move across their landscape procuring and fashioning their tools as they go, could the remains of flint arrowheads and projectile points be just dropped items, or used in these areas for the preparation of food? ‘These projectiles rarely, if ever, provide evidence which confirms whether or not they had been loosed in action’ (Foard & Morris 2012: 41).

The shape of causewayed enclosures ranges from circular, irregular circular and irregular oval. Many of the shapes were dictated by the ground on which they were constructed, for example, following contours, which gave them their irregular shape. Although topographical features were considered one of the main reasons for their shape, it has been shown that over time ‘an increasing proportion of these sites assumed a more regular configuration’ (Bradley 1998: 81). Was this due to society dictating the way the enclosures were to be constructed, personal decisions, or a coming together of ideas over time and space to make them more universal as exchange and ideas spread across the land?

Causewayed enclosures were not just ‘plonked’ down in the landscape. There was some meaning to their location and positioning. The monuments were placed within a ‘rich’ landscape (Fox 2010:5); a richness for both agriculture and the gathering of local foodstuffs for consumption, ‘a number of productive ecological zones which, from the Mesolithic, had offered the potential for the exploitation of varied wild, and subsequently domesticated, resources’ (Wessex Archaeology 2005: 19). They were situated mostly on raised ground and slopes which may already have been ‘cleared of trees’ (Tilley 2010:49) to ensure they would be viewed from certain areas, giving a clear message to all who saw them. They were ‘fixed points’ (Pollard 2001:319) in a landscape that was starting to develop a social meaning – a meaning that today, is still being debated over.

Looking at the sighting of causewayed enclosures Francis Pryor (2010) has come to the conclusion that they were deliberately positioned off centre, out of respect for topographical features, such as the top of a hill or a nearby river, also that they were constructed in groups in some areas. For those in groups or generally closer together than others, there is the distinct possibility that they may each have had differing functions and therefore have offered a greater variety of activities and not just one or two, as usually thought and discussed (Bradley & Hodder 1979: 95). Whether they were in groups or on their own, there is a general consensus that their function was ‘conceptually distinct from the world of day to day practices’ (Edmonds 2003: 73). They were constructed in places where they were meant to be seen, (Tilley 2010: 49) by those around; land had been cleared for them, and they became an important aspect of the landscape.

If their functions were those of distinct practices, then how were they constructed? Were they built in one large get-together of local people? Did communities come together at specific times within each calendar year and construct them? Or were they built over a number of years, with ditches being recut and banks added to from episodic activity in order to maintain them for their specific purpose? (Harding 2012: 153).

It had been noted by a few researchers that they did not stand alone on the landscape. They were closely linked to other structures of the same date – namely barrows and curcuses (Oswald 2011:5). These overlapped in their chronology and show an association but not at them all.

Causewayed enclosures set within the landscape would have permanently marked an area, made it stand out as a place of significance, one that had a role to play within society (Pollard 1997). However, it is being more widely accepted now that they may not have had ‘a single set of functions’ (Pollard 1997:31) and that they were multi-functional. Indeed, those with a number of circuits of broken banks and ditches would have been ideally suited for segregated activities within the different open boundaries (Harding 2012: 153). This would give more weight behind the theory that they were social places where interaction of various communities would have been undertaken, even being resource centres where ‘material and symbolic resources may occasionally have been challenged through direct combat’ (Edmonds 2003: 45); or where disputes between neighbours, tribes, families or those further afield may have been settled (Pryor 2010).

Causewayed enclosures have baffled archaeologists in the past and even today. They have the banks and ditches of fortified places; however, these have breaks in them; they are not continuous – why? What would be the reason for going to all of the effort of constructing defences if only to have them breachable? Were they constructed with defence in mind? If not, then why construct them in such a manner? We may never know……..

Orange, H., Sygrave, J. and Maxted, A. (2015) An Evaluation Report to the Heritage Lottery Fund on the outcomes of the Whitehawk Camp Community Archaeology Project. ASE Project No: P106. Report No 2015202

Pryor. F. 2010. The Making of the British Landscape: How We Have Transformed the Land, from Prehistory to Today. London: Penguin Books.

Whittle. A. W. R. 2003. Bradley. R. 1998. The Significance of Monuments: On The Shaping of Human Experience in Neolithic and Bronze Age Europe. Oxon: Psychology Press.