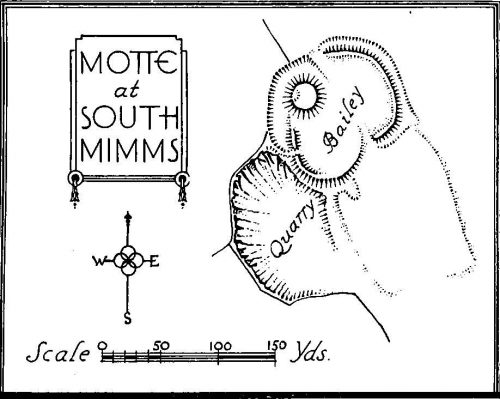 The castle at this site is believed to have been constructed during the Anarchy period of English history, when Stephen and Matilda fought over the British crown.

Many castles were ‘thrown’ up by those on both sides to protect themselves, as many constantly changed sides, depending on who was winning at the time!

South Mimms castle is a motte and bailey type castle. The aspect that sets it apart from most others is that the wooden tower keep in the centre was constructed first and then the earth was thrown up around it, burying the lower floor. This floor then became a cellar or prison. The soil which was added around the tower is thought to have come from that which was discarded as the surrounding ditch was cut.

During excavations between 19561-1965, large foundation posts were identified within the mound. It showed that the tower had slightly tapered sides.

The bailey was kidney-shaped, and the entrance was located to the south-east. There was possibly a postern located on the west of the site.

The whole site covered c.2¼ acres. The motte is currently standing at 9 m high and has a circumference of 35 m. The bailey measured north to south 125 m and east to west 110 m. The site was constructed on an east-facing slope.

The ditch has now been filled in and quarrying has taken place on part of the bailey.

Archaeological finds at the site include apiece of reused Roman tile, twelfth century brick and roof tile, crossbow bolts, medieval pottery dating to the 13th and 14th centuries, and a deer antler which has a hole drilled in it, once believed to have held an iron spike.

Due to the presence of 13th and 14th century pottery it is possible the site may have been used into these periods.

The site was once held by Geoffrey de Mandeville, Earl of Essex, in 1141. He changed sides during the Anarchy and became very unpopular. He went on a rampage through the fend and this gave him the nick name of the Scourge of The Fens.

It is believed the castle was demolished in 1143. The castles thrown up during the Anarchy were called Adulterine castles, and many were demolished after the fighting settled down, with Stephen keeping his crown. Some of those who had sided with the Empress Matilda had their lands taken as well as having their Adulterine castles demolished.

For more information on this site please click the links below.