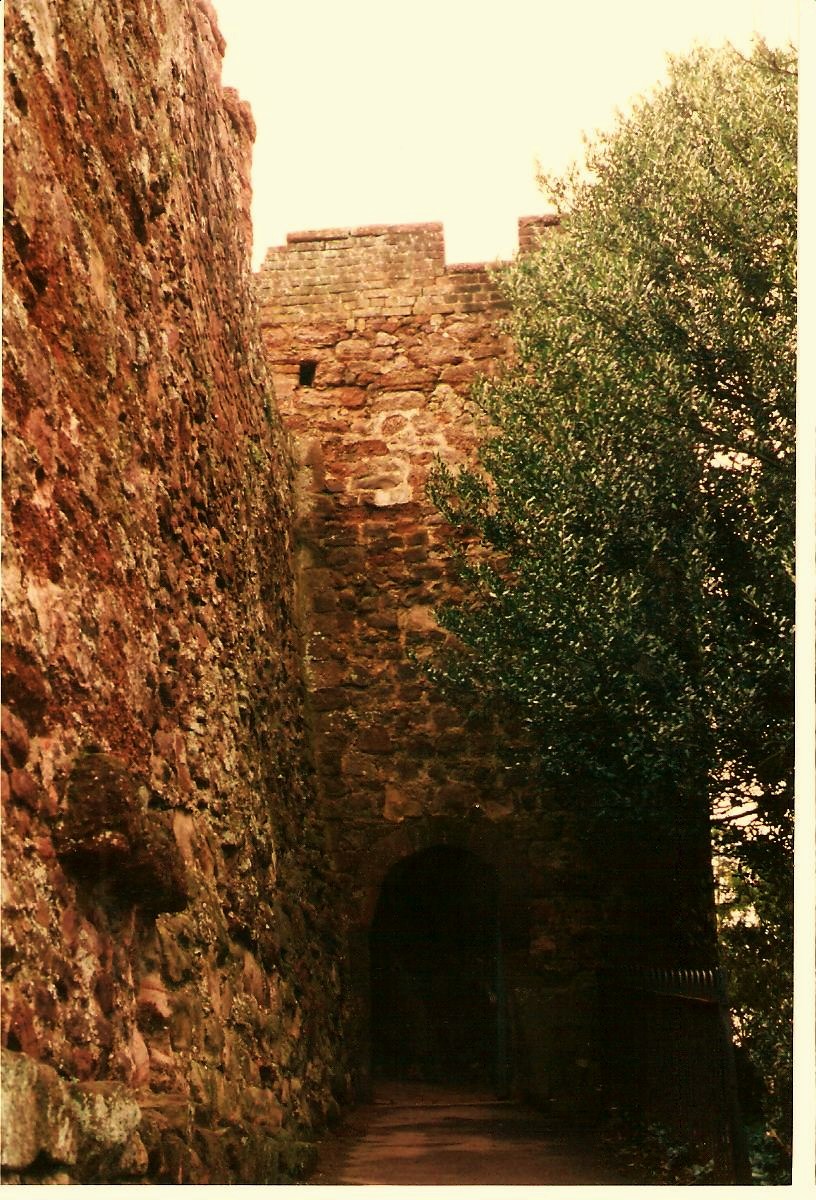 Exeter is located on a dry ridge overlooking the River Exe, and is the county town of Devon. The site of the town was dictated from its possible earliest setting, believed to have been by the Romans (Pettifer 1995:57). The valley gravels made the area perfect for habitation,

The gravels were comparatively level, they lay on a platform well above the river, they could easily be worked, wells could readily be sunk through them, and they were dry enough to be suitable for the foundations of timber buildings (Shorter 1954:250).

The southwest of the town dropped steeply to the River Exe, and it was this river that contributed mainly to its success. The River Exe flowed through to the sea, the English Channel, and it is from here that traders bought their goods from the Mediterranean, Ireland and the Iberian Peninsula, (Balzaretti & Nelson 1992:1557), to be traded for local goods such as wool, tin and leather (Lewis 1924:455).

The location of the town, and its natural approaches ‘through the Blackdown Hills and the East Devon plateau’ (Lewis & Shorter 1939:150), meant that the inhabitants were able to control a large area of the surrounding region. This was important during the Roman period as it meant the garrison could keep control of the local Dumnonian tribe, with little effort, ‘Exeter was a British tribal town …. the region did not cause the central authority much anxiety’ (Lewis & Shorter 1939:154). Being the last town southwest from London, it also lay a fair way from the other major Roman centres, therefore a status quo between the Romans and the locals was of vital importance.

One of the earliest names given to Exeter is accounted for in a poem from by Izacke (1724), that being of Cearisk. Hooker (1765) gives us the name of Cair Penbulgoile ‘the prosperous chief town in the wood’ (Hooker 1765: 3) and states this was the name given by the early Britons, before the Romans came. Geoffrey of Monmouth referred to it as Caer Penhuel Goit, also translating this as being ‘the rich chief city in the wood’ as well as Pennehalteoaire,  ‘chief city or town upon the hill’ (Spreat 1824:7). Exeter was also known by other names to the Cornish people at that time, and included Pennecaire, Caireruth and Cairiske (Hooker 1765:3). All of these names match the description of the environment in which the city was sited, as was the custom in the past.

Hooker (1965) gives an explanation as to the different names referring to the topography and the ancient traditions of naming villages according to their locations within the environment,

Pennecaire signifyeth the Chief city, Caireruth the Red or Reddish City, so called, and taking the name of the ground and soil whereupon ‘tis situated, which is a red earth; and Cairiske is the city of Iske, being so called of the river, which the Britons named Iske (Hooker 1765:3).

Izacke continues his poem by giving us four of the most common names given to Exeter as known in the period around 1724,

The Romans named their fort on the site Isca Danmoniorum (Spreat 1824:7), and it is noted that Ptolemy (c.AD 162) referred to the site as ‘Isca, and called the river Isaca….Bale following the same opinion doth also name the city Isca’ (Hooker 1765: 3). Isca was the Celtic name for a river, and so naturally the site took a part Celtic and part Roman name when the foreign army moved to the area.

The Saxons were the next race to occupy the area and they named it Moncton (Izacke 1724: xxv), or Monketon (Hooker 1765:4). The change occurred due to the ‘multitude of monasteries in this place’ (Izacke 1724:17). This gives us an insight into the activities undertaken there and around the area. The concentration of monasteries demonstrates that the area was of some importance in the young and growing religion of Christianity, and it appears to have taken a firm hold following the Roman withdrawal and Constantine’s approval of Christianity to be practiced by the Roman Empire c.315. With Christianity came a certain wealth to the area, and this has been displayed in the archaeological record in and around Exeter. Among other cultural findings was a Saxon ring made of gold, found in the city and alludes to the possible prosperity of the town, and its inhabitants, at that time (Graham-Campbell 1982).

The next change of name came under King Athelstan, where he ‘called it after the name of the river, Esseter, or Exeterra’ (Hooker 1765:5), but earlier that century, Izacke, in 1724, had attributed the modern name to Athelstan, in ‘Anno Domini 932 [he] first called it Exeter’ (Izacke 1724:18). Athelstan may have used either of the aforementioned names that, linguistically, sound like the modern name, with Izacke (1724) either being unaware but decided not to mention them and jump straight to its modern pronunciation. Hooker (1765) appears to have undertaken more research into the area for he also informs us that ‘I find it also written in an old chronicle, that it is named Exancestria or Exancestre’ (Hooker 1765:5). With the development of the English language and the addition of words from the different races that had had an influence in the area, it is of little wonder that it was referred to under various spelling and pronunciations, as well as different people in different regions calling it by the name they knew or understood.

The construction of the defences around the town may possibly have been in relation to politics of the Mediterranean and the Romans inability to provide an Emperor that was capable of holding the Empire together. Markus Aurelius chose his son, who was not capable, and therefore the seat of power went to whoever could pay the highest for the privilege. This indecision led to instability within the Roman Empire, especially regions furthest away from the centre of power, including Britain. This would have necessitated fortifying, or improving, defences at sites held by Rome in case of any attack, or the Empire collapsing.

Exeter has a rich and colourful history in relation to defending itself against attackers, from both sea and land. Following the Roman withdrawal it is recorded that

Exeter was being held by Brian, nephew of Cadwallo, the last British King, was besieged by Penda, King of Mercia, in 633; and that Cadwallo, who had some time before, been obliged to leave his kingdom, by the success of the Saxons, returned; and having collected an army, fought a battle with Penda, whom he vanquished near Exeter, and relieved the town (Lysons & Lysons 1822:v).

The glory of winning appears not to have lasted that long for the site ‘fell to the West Saxons circa 658’ (Pettifer 1995:57). The Anglo-Saxon Chronicle does not mention Exeter until AD 876 when it informs us that the Danes attacked the area (Lewis & Shorter 1939:155; Lysons & Lysons 1822:v). The Anglo-Saxon Chronicle and Matthew of Westminster both state that ‘They [the Danish] wintered in Exeter; both in 876, and 877; and that in 877 Alfred besieged them in that town’ (Lysons & Lysons 1822:v). The Rev. Oliver, writing in 1861, mentions that the Anglo-Saxon Chronicle states ‘In the year 418 the Romans collected all their hoards of treasure in the island, and some they hid in the ground’ (Anglo-Saxon Chronicle cited in Oliver 1861:3). With tales of treasure and gold in the ground it is of little wonder there were so many attacks upon the land, especially where religious institutions were sited, as at Exeter, well known for their riches and sustenance. A mint had been set up at Exeter in the year AD 930 (Hooker 1765:106; Balzaretti & Nelson 1992:158) and with the minting of coin, this added to the appeal of the site.

The year AD 964 saw Exeter as the setting for the ‘Benedictine revolution, and the subsequent scribal activity which we can expect to have accompanied that reform would have led to the production of manuscripts’ (Conner 1993:13). This is the period in history when the town’s name was changed to Moncton, as a result of the number of monastic houses in the area.

In AD 977 Exeter was again attacked and burnt by the Danes (Lysons & Lysons 1822:vi). However, they were not so lucky in 1001 when they were unable to take the town, so instead destroyed the surrounding countryside, affecting harvests. In 1003 King Swain of Denmark took vengeance against the country following the massacre of his countrymen on previous raids, ‘Exeter became the first sacrifice to his fury. After having been bravely defended for two months it was at last delivered through treachery ‘(Spreat 1824:10). Another angle on the story is given by Conner (1993) when he states,

After 19 August 1003, when King Sweyn, in retaliation for King Æthelred’s having murdered his sister, swept down on Exeter, and, reportedly ‘burnt the churches, in which numerous and precious libraries were kept, with their books (Conner 1993:21).

Whatever the reason for the attack was, this episode demonstrated that there were those willing to turn their backs on their own countrymen, however, they probably faced the same fate.

Exeter’s location has ensured its trading, religious and cultural importance over the centuries, and even today, it plays an important role in the region. Despite being under constant attack from both land and sea, the residents hung on to their town thus ensuring its prosperity and growth. The town’s motto is Semper Fidelis, Always Faithful, and I think the town has proved this over its long and eventful past. Long may it prosper into the future!

Hooker. J. 1765. The Ancient History and Description of the City of Exeter. Exeter: Andrews and Trewman.

Pettifer. A. 1995. English Castles: A Guide by Counties. Woodbridge: The Boydell Press.

Spreat. W. 1824. A New Guide to the City of Exeter, and its Environs: With Descriptive Sketches of the Adjacent Watering Places. Exeter: Printed for W. Spreat.