Posted on December 11, 2020 by fortifiedbritain 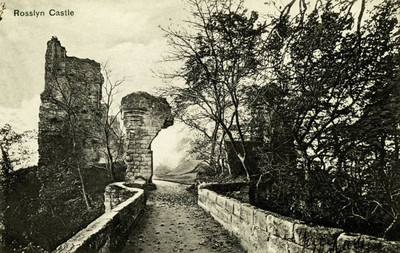 The castle sits on the northern bank of the River Esk on Roslin Glen cliffs. Part of the castle is cut into the cliff face. The area it sits on forms a promontory.

The site is protected by the River Usk on three sides and is protected landwards by a rock cut ditch which cuts off the promontory. The ditch is spanned by a causeway. During its earlier occupation access to the site was across a drawbridge.

Originally the keep measured approximately 16 m x 12 m with the walls being 2.9 m thick. The top held a machicolated parapet.

The East Range measures 31 m x 10 m, had a pitched rook and included 5 floors. There are gun loops in the walls. The doorway leading to the main entrance at third floor level has carved above it the initials of William St. Clair and the date of 1622. The lower 3 storeys are carved into the rock and the are 4 vaulted rooms. The lower level holds the kitchen, with a large chimney and ovens, and bakehouse. The central staircase was added in the 17th century.

The upper two floors include the main hall. This hall has a large carved fireplace with the initials of WS and JE – William St. Clair and his wife Jean Edmonstone, and the date of 1597. The ceiling was also decorated with the armorial bearings of the St. Clair family.

There is a small walled garden to the south side, and at the river below the site are the remains of a watermill and a wooden bridge. 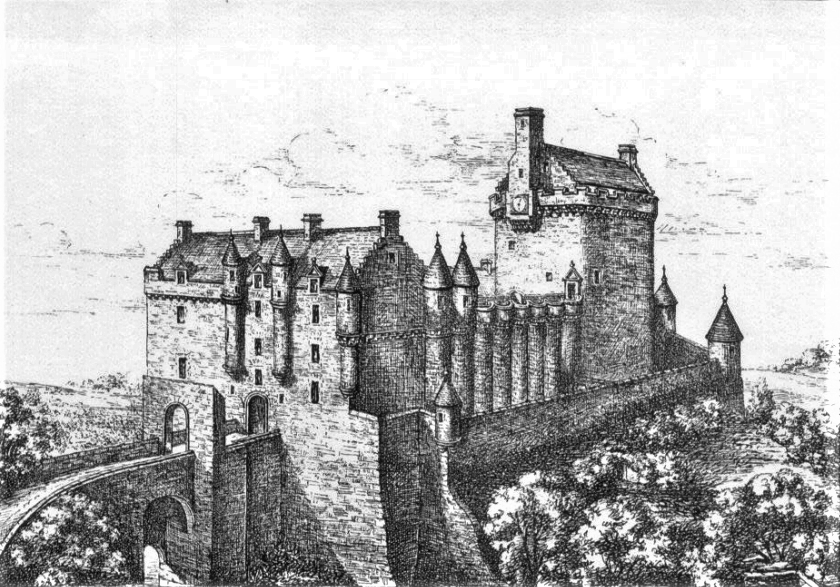 Here is the timeline for Roslin Castle

1488                 Dating from: 5 manuscripts from the St. Clair family are housed at the National Library of Scotland. They include the Roslin-Hay Manuscript.

1591                 Rosslyn Castle was forfeited. It was held for the King by William Leslie for George Gordon, 1st Marquis of Huntly. Francis Stewart was at the site, but he fled leaving behind his wealth and clothes.

1622                 The upper storeys of the East Range were renovated and the Great Hall was added. The doorway leading to the main entrance at third floor level has carved above it the initials of William St. Clair and the date of 1622. A clock tower was added and a stone staircase.

1630                 Sir William was granted Charters by the Scottish Masons and recognized as the Grand Master Mason of Scotland.

1689                 Lady St. Clair obtained a Act protecting her from the destruction of the mob the previous year, and Parliament paid her money to compensate for some of the stolen belongings and the burning of the fields around the castle.

1736                 Sir William St. Clair, 19th Baron of Rosslyn resigned from his office as Grand Master Mason of Scotland as he had no direct male heirs. He did have a daughter. The poem at the end of the timeline was written for the occasion.

– The 5th Earl was a gambler and he lost everything owing great debts. He was declared bankrupt and all the St. Clair wealth, furniture, gold and silver, and fittings from the Castle were sold off to pay his debts.

Relating to the comment under 1736 – here is the poem that was written by the Masons for Sir William St. Clair, 19th Baron of Rosslyn when he resigned his position as Grand Master Mason of Scotland, as he had no direct male heirs.

How evervescent are thy days!

Protracted to its longest date,

How short the time indulg’d by fate!

Nor wisdom’s self evolve the grave.

Where e’er our various journies tend,

To this we soon or late descend.

Though aft behold and still admired,

And in sublime regions shines.

Let us, whom ties fraternal bind,

Beyond the rest of humankind,

Then join the Eternal Lodge on high.

For more poetry on this amazing site CLICK HERE.

Anderson. J. 1881. A New Hand-book to the Chapel and Castle of Rosslyn. J. Anderson.

Conolly. M. F. 1866. Biographical Dictionary of Eminent Men of Fife: Of Past and Present Times, Natives of the County, Or Connected with it by Property, Residence, Office, Marriage, Or Otherwise. J. C. Orr.

Hay. R. 1835. Genealogie of the Sainteclaires of Rosslyn. Including the Chartulary of Rosslyn. T. G. Stevenson.

Jackson. J. 1837. Historical Tales of Roslin Castle, from the Invasion of Edward I. of England, to the Death of Mary Queen of Scotland. James Jackson.

Lawson. J. P. 1858. Scotland Delineated. A Series of Views of the Principal Cities and Towns, Particulary Öf Edinburgh and Its Environs: of the Cathedrals, Abbeys, and Other Monastie Remains. Day.