Posted on September 4, 2020 by fortifiedbritain 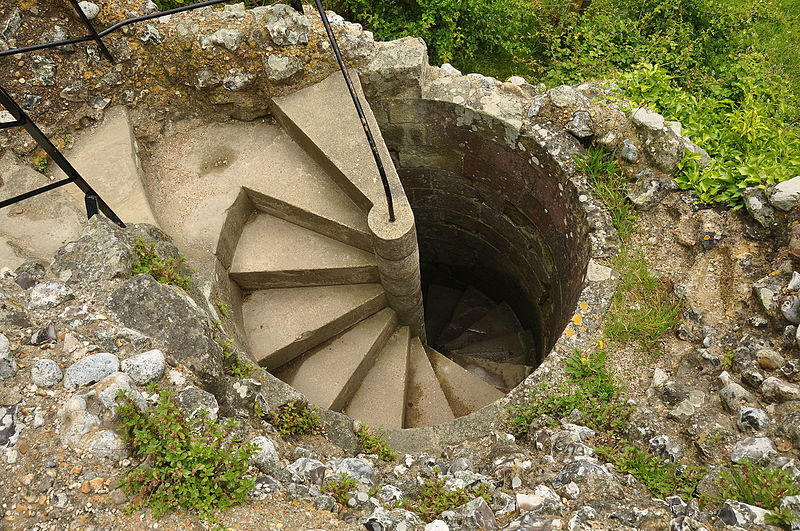 Pevensey Castle once stood on a peninsular but due to silting the site now stands about 1.5 km back from the sea. It covers an area of 3.7 ha and is oval in plan.

The site was originally constructed by the Romans. When the Normans arrived, they immediately saw its defensive advantages. They located their new castle at the eastern side of the original Roman fort, utilizing the already strong walls of the Roman fort, which acted as the outer bailey.

Pevensey was England’s first post-conquest castle. The garrison was left at the site, to protect it, as William I continued to move across England.

The castle included a gatehouse which was protected by 3 semi-circular towers that provided flanking cover. The gatehouse towers include vaulted basements divided into two rooms. The basement in the north tower is reached by a trap door, and the one in the South tower by a spiral staircase. These areas could have been utilized as grain stores and for holding prisoners. The drum tower includes arrow loops of about 8ft in length, providing cover for the longbow men.

The bailey walls measure 3.5 meters thick and ten U-shaped bastions remain which are spaced at irregular intervals. There are also gaps in the walls to the North and the East.

It was one of the original Cinque Ports.

The site has seen much action and was fortified against the Armada and a Napoleonic invasion. But none of this has stopped the robbing of its materials to be used in local buildings in the past.

The site has also been known to have been a thriving port – where goods were imported and exported to the continent, as well as being a place where naval ships could be moored.

Through tradition, the castle has always been granted to the Queens of England.

Here is its amazing timeline……

290 –             The fort was called Anderida. It was built to the shape of the land it stood on and included an enclosure with flanking D-shaped bastions. Was a fort of the Saxon Shore.

1066 –           Believed to be the site where William the Conqueror landed in Britain before advancing on to Hastings. His men cut a ditch by the old Roman West Gate for protection.

1066-1071 – The castle was built within the east part of the Roman fort. The site was granted by William I to his brother, the Count of Mortain.

1088 –            Robert of Mortain and the Bishop of Odo held the site against William II (William Rufus). William won after 6 weeks of holding out – he starved the garrison.

1100 –            Around: The first stone work began at the site by the Normans which included the Keep – it incorporated part of the east wall of the Roman fort as one of its walls. Later, three more projecting towers were added.

1144 –          Held by Henry fitz Empress (later Henry II). It was entrusted to Gilbert de Clare, but besieged by King Stephen, who eventually starved the garrison in submission.

1147 –         Gilbert de Aquila rebelled against King Stephen – the castle was again starved into submission by Stephen of Penchester.

1216 –          Slighted. King John ordered William, 6th Earl of Warenne, to surrender the castle after he sided with Louis, Dauphin of France. He had to surrender it to Matthew fitz Herbert, who was then given orders to demolish it.

1264-1265 – The third siege of the castle when supporters of Henry III were defeated at the Battle of Lewes. The castle was held by Peter de Savoy and the Barons led by Simon de Montfort withdrew after destroying a large area of the wall.

1399 –            Henry, Duke of Lancaster, son of John of Gaunt, laid claim to the Crown, and Richard Ii laid siege to the castle. Lady Joan was left to defend the castle after her husband, Sir John Pelham, constable of the castle, had gone to join the army of the Duke of Lancaster. She held out until the Duke was able to relieve her.

15th C –          Early: Due to the poor state of the Roman walling, the north side of the keep was described as ruinous. Prisoners kept at the castle, despite its ruinous state included James I, King of Scotland, and Henry IV’s second wife, Joan of Navarre.

1940 –             WWII – The site was used as a military base. Gun emplacements, machine gun posts and pill boxes were installed. The garrison, consisting of units from the UK, Canada and the USA were installed in the drum towers. The garrison also included part of the Home Guard.

This is not the WHOLE story for the site. There are many other incidents and events that would have happened and that have not been recorded to history due to being not considered important enough! But it is clear to see that this site is of major importance to the history of Britain especially being considered the site of the first castle erected by William I on British soil.

Lower. M. A.1853. On Pevensey Castle and the Recent Excavations There. Sussex Archaeological Collections Relating to the History and Antiquities of the County, Vol. 6. Pp. 265-274.

Pettifer. A. 1995. English Castles: A Guide by County. The Boydell Press.

Woolnoth. W. 1823. A Series of Views Of The Most Interesting Remains Of Ancient Castles Of England And Wales; engr. by W. Woolnoth and W. Tombleson, with hist. descriptions by E.W. Brayley. Longman.

Woolnoth. W. 1825. The Ancient Castles of England and Wales. Longman.