Posted on November 27, 2020 by fortifiedbritain 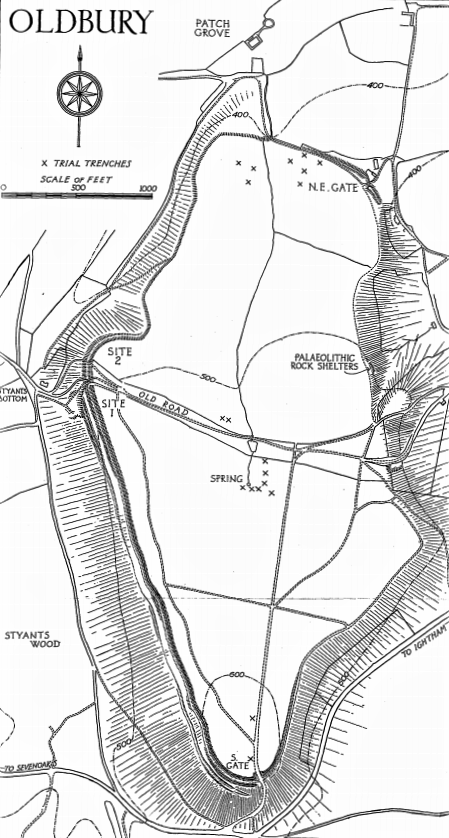 Contour hillfort covering approximately 50 hectares. It is the largest hillfort in the south east of England and is defended on three sides by natural defences of the greensand ridge it sits on, on the Weald.

Originally thought to have had two periods of construction. The first phase included a small dump constructed rampart and a wide ditch measuring c.1.5 meters deep, and 3m wide. The entrances were located at the north east and south, with a defensive outwork located outside of the southern entrance. Excavations have shown that there was only one construction phase. Includes a double bank in some areas. The ramparts originally stood around 10m high. Today they survive to a height on 1m in places.

The wide ditch is believed to have been of the Fécamp type defences, originally developed in northern France. These defences included a shallow, wider ditch and incorporated sharpened stakes or Cheuaux-de-frise, to stop attacks by riders and cavalry.

Archaeology has shown that there is no evidence of Oldbury being occupied on a permanent basis, so it may have been a place of refuge or for gatherings. There is, however evidence of a short period of light occupation at the southern end, and this is interpreted as having happened during the construction phase of the site.

There is a spring located within the camp which would have been their water supply. Quarrying activities were undertaken during the Roman period evidenced by some pottery within the quarrying context.

43 AD                           Defences improved. The bank was enlarged, and the ditch recut to include a flat, wide bottom. The entrance at the south was inturned. There is evidence from this date that the timber gate located at the north east entrance may have been burnt down – evidence in the post hole remains.

Cunliffe. B. 2004. Iron Age Communities in Britain: An Account of England, Scotland and Wales from the Seventh Century BC Until the Roman Conquest. Routledge.

Hasted. E. 1797. General history: The weald. The History and Topographical Survey of the County of Kent: Volume 1. Bristow.

Hastead. E. 1798. The History and Topographical Survey of the County of Kent, Volume 7. W. Bristow.