Posted on January 6, 2023 by fortifiedbritain 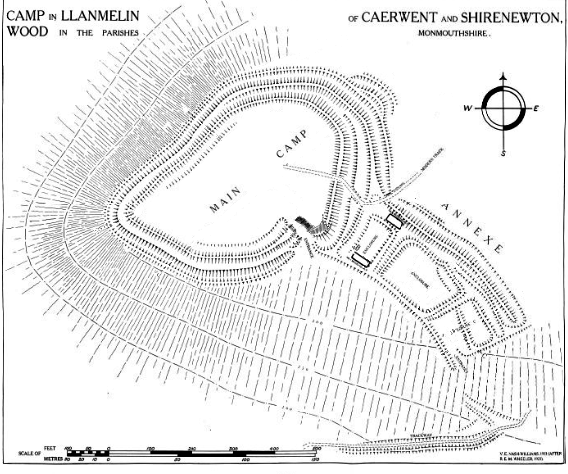 Llanmelin is situated on a promontory overlooking the Caldicot levels and the Bristol Channel. It is also close to the Roman town of Caerwent. The location of this Roman town so close to the hillfort suggests that it was of some importance at the time.

The site sits within Llanmelin Wood which covers an area of 17.8 hectares, with Llanmelin Hillfort itself covering an area of 3 hectares. It includes a main enclosure, an annex comprising of two rectangular enclosures, and an outpost located some 250 meters to the north-east of the hillfort.

The main enclosure is oval and covers an area of just over 2 hectares. The entranceway is located on the south-eastern side with the passageway measuring 15.24m in length and 7.62m in width. The annexes rectangular enclosures measure 150m by 60m each.

The site is defended by two to three ramparts and ditches and include a scarp and counterscarp. There is naturally steep protection on all the sides except to the east where the site is approached by a gradual slope.

There were three phases of construction for this site,

The main period of occupation for the site has been placed during the Middle Iron Age – 400-100 BC. Round houses have been identified within the interior of the main enclosure and it is believed that this was the tribal center for the Silure Tribe.

The Silures are understood to have been a tribal confederation comprising of several small groups who shared cultural values. Originally believed to have come from Spain, as they were described by Tacitus as being of dark complexion with curly hair.

When the Romans came to the area, the Silures undertook a form of guerrilla warfare against them, and they even managed to defeat the Second Legion. It is not known how they finally came under Roman control, but Tacitus tells us that they were ‘changed neither by cruelty or clemency’. In 75 AD the Roman town of Venta Silurum was developed and this is also the same time that Llanmelin Wood hillfort ceased to be occupied. It can therefore be deduced that the occupants of the hillfort moved into the new Roman town, where they were granted local administration duties by the Romans.

Archaeological evidence for the interior of Llanmelin shows that the site only housed a few hundred occupants. This appears to be a small number if the site is considered to have been a major tribal center – maybe it was one of many centers belonging to the Silure confederation and therefore was not required to hold a large population in one area.

During the Medieval period the site was used. Hut platforms have been identified – one in each of the rectangular enclosures of the annex. This shows local resourcefulness at a time when the history of the country was changing following the Norman settlement of the area.

Here is the timeline for the site.

The site has been excavated only twice. Once in 1930-1932 and again in 2012. Archaeologically it is divided into three areas

The main area revealed a series of post-holes believed to have been the roundhouses used by the Silure occupants, as well as another set which may have been a grain storage structure. The entranceway had limestone constructed banks which was made from the rubble dug out of the rock cut ditch during the second phase of construction. This is a classic Glacis style rampart.

The annex, originally added during the third stage of construction, revealed the two Medieval hut platforms and Medieval pottery associated with them. It is unsure as to their original use, but it is believed that as they were added at the time the Romans infiltrated the area. They may have been used to hold their livestock, however, two burials have been uncovered in them, one being an adult female, suggesting that they may also have had a funerary role.

The woodland outpost stood 250m from the north-east side of the hillfort. It is C-shaped and was erected at the same time of the first construction phase in 2300 BC. It is defended by a bank and ditch. This is an unusual feature; however, archaeological evidence has shown that bronze and copper smelting took place within the main area of the site so this may have been necessary to protect its raw materials.

The following is a list of the archaeology which has been uncovered at the site.

A little distance from the site was Great Llanmelin Farm, which has since been demolished. On the land was found a small bronze mule head artefact. The front was highly crafted but the back is smooth and flat. Dating to the Roman period it is believed to have been a figurehead that would have been affixed to a saucepan handle. It is also believed to have been dedicated to Bacchus, the Roman God of wine and intoxication – little wonder it was lost if those handling it were drunk!

The archaeological evidence paints a picture of the site, one of crafting and living and possibly trade. There has, to date, been no evidence of violence at the site, which supports the known history that the Silures were not taken by force or subdued.

Further investigation would fill in a few of the missing pieces of this sites jigsaw puzzle. But until then, the debate as to its origins and inhabitants will remain an hypothesis.

The site has been put forward as possibly having been King Arthurs Camelot.

And that the amphitheater of the nearby Roman town was Arthur’s Round Table.

A bit farfetched and plucking at straws – there is no archaeological evidence that the site was Camelot, used during the Arthurian time, or was even occupied after 75 AD.

So, this is a big NO. Not Camelot.

Llanmelin Wood Hillfort is an interesting site, with some very interesting features and puzzling archaeology. I have a feeling it will hold onto its secrets for a while yet. Maybe it’s Silure occupants still protect it – after all, archaeology is a form of destruction…

Brown. I. 2009. Beacons in the Landscape: The Hillforts of England and Wales. Windgather Press.

Duncumb. J. 1884. Collections Towards the History and Antiquities of the County of Hereford. Volume 1. University of Minnesota.

Gibson. A. M., & Woods. A. 1997. Prehistoric Pottery for the Archaeologist. Leicester University Press.

Jackson. R. 2020. The Roman Occupation of Britain and Its Legacy. Bloomsbury Publishing.

Melrose. R. 2016. Religion in Britain From the Megaliths to Arthur. McFarland.