Posted on October 23, 2020 by fortifiedbritain 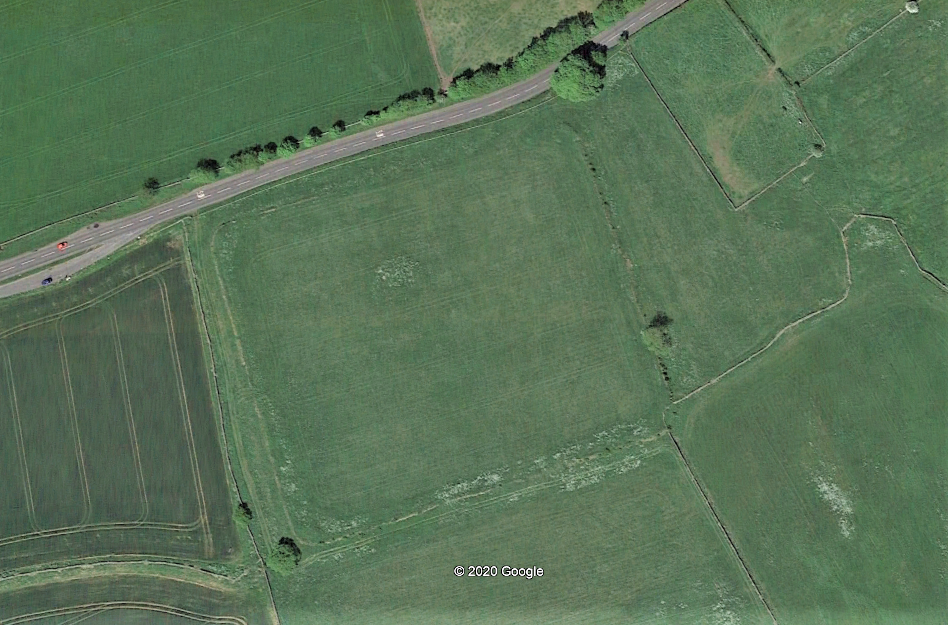 Lanchester its between the forts of Vindomora (Ebchester) and Vinovia (Binchester) 32 km south of Hadrian’s Wall, in the area of Britain known to the Romans as Britannia Inferior (Lower Britain) and this area was governed from Eboracum (York).

The fort sat upon a ridge overlooking the countryside on three sides. It was the typical rectangular shape of Roman forts measuring 164 meters by 140 meters, covering an area of 2.3 hectares. It had the usual four gateways set in at the cardinal points, with the North and South gates offset from the centre. The fort has natural protection from sloping ground to the South, West and North, and on the east traces of a double ditch have been found measuring approximately 0.5 meters deep. There was a berm (space between the ditches) measuring 3 meters wide. The site had rounded corners and it was recorded in 1938 that it originally had 10 wall turrets, it also gave a description of the gateways and the repair work undertaken,

[Gateways included] double portals flanked by guard chambers…..rebuilding of the fort wall, a new floor in the turret, and repair work in the east guard-chamber of the south gate (Roman Britain 1937).

There were the usual buildings included within the fort, 8 barrack blocks, a principia, stables, bath house, commanders house, and granaries. More on the buildings within forts later this week!  The buildings were constructed of stone and several them still survive in the form of foundations and surface rubble. Due to the archaeological evidence it is suggested that the fort may have acted as a possible armory. With iron slag being found around the site this could be an indication of part of the forts function in its time.

There is evidence of a vicus outside of the fort which will be covered later this week when we look at the archaeology of the site. And a cremation cemetery has also been identified which lays to the west of the fort.

The fort faced Dere Street, an important Roman road running from Eboracum (York) to the Antonine Wall in Scotland.

The sites water supply was fed from two aqueducts. One of them being the best-preserved Roman aqueducts in Britain today.

The fort was garrisoned at different times by XX Valeria Victrix (20th Legion) and Cohorts of I Vardulorum, I Lingonum, and I Lingonum Gordiana.

Here is a timeline for the site

Remains from Lanchester are still evident today, and it was also recorded in the 19th century that there was a subterranean chamber in the south east corner of the fort which had steps leading down to it.

There is quite a lot of archaeology associated with the site, including ceramic finds, spindle whorl, Sailors Discharge Diploma, several dedication slabs, alters etc., the remains of buildings and the still standing walls, which in some areas are at a height of around 3 meters and measuring 1.5 meters thick. There is also evidence of a fire having ripped through the fort,

The red ashes of the basilica and bath, the vitrified flooring, and the metallic substances evidently run by fire, which occur amongst the ruins, form a strong indication that the structure perished in flames. (Collingwood 1851).

As with several old Roman forts, this one also saw some reuse following Roman withdrawal, but in what sense and for how long is unknown. One thing is for certain though, due to lack of intrusion this is an amazing site that is beginning to share some of its secrets of the past and I for one am looking forward to further archaeological work and investigations both within and without her walls.

Bishop. M. C. 2014. The Secret History of the Roman Roads of Britain: And Their Impact on Military History. Pen & Sword.

Collingwood. J. 1851. The Roman wall: a historical, topographical, and descriptive account of the barrier of the lower isthmus, extending from the Tyne to the Solway, deduced from numerous personal surveys. J. R. Smith.

Melrose. R. 2016. Religion in Britain from the Megaliths to Arthur: An Archaeological and Mythological Exploration. McFarland.

William Whellan and Co. 1856. History, Topography, and Directory of the County Palatine of Durham: Comprising a General Survey of the County, with Separate Historical, Statistical, and Descriptive Sketches of All the Towns, Boroughs, Ports, Parishes, Chapelries, Townships, Villages, Wards, and Manors. To which are Subjoined A History and Directory of Newcastle-upon-Tyne, and a List of the Seats of the Nobility and Gentry. Whittaker & Company.