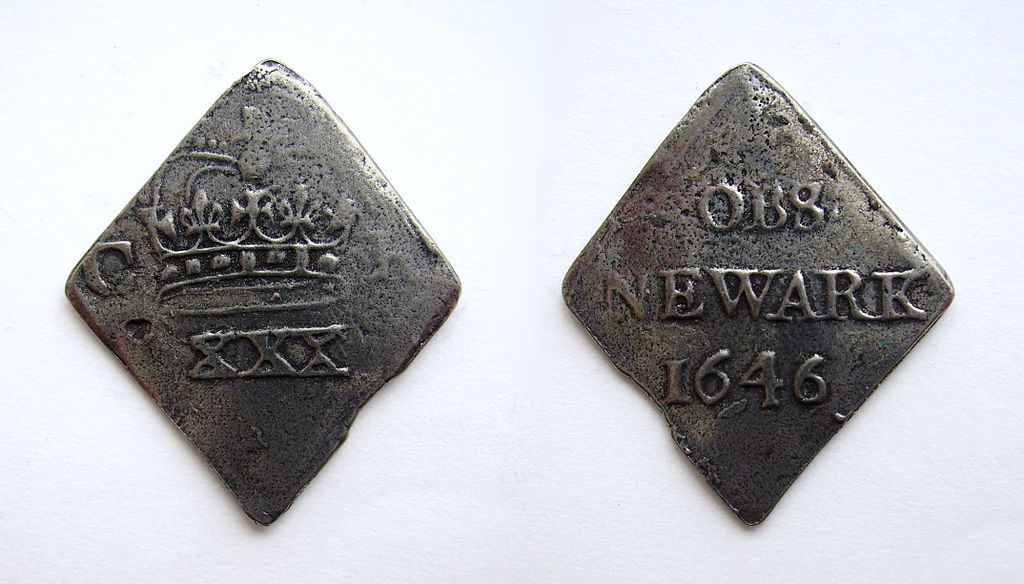 The King’s Sconce was an earthwork built to protect the approach north on the Fosse Way at the town of Newark on Trent. The town was a vital link to the king’s supporters in the north.

Newark was a Royalist town and the earthworks were built to protect it from the Parliamentarian forces. The design was Dutch, as were most of the sconces.

The King’s Sconce was constructed of earth and located in the Spittal area of the town to the north east. It is recorded as having been very strong and high, with the ditches camouflaged.

The locals manned the sconce to protect their town. A 3-bay house was built on it for accommodation.

During the siege of 1645-1646 the town produced their own coinage in the form of tokens – some of which survive today.

1645 – The town is besieged by the Scots and a large portion of the Parliamentarian army.

1646 – The 1645 siege is still under way. On 6th May John Belasyse surrenders the town under orders of Charles I.

1646 – 12 May “The whole countryside was summond in with pick and shovel and crowbar; earthworks were levelled, ditches filled in, the bastions demolished, the King’s Sconce destroyed, and the castle dismantled” (Sketchley, 1859).

1856 – The site was demolished for the Great Northern Railway.

2020 – Modern housing around the area where the sconce was sited.

Bull. S. 2008. ‘The Furie of the Ordnance’: Artillery in the English Civil Wars. Suffolk: Boydell & Brewer.

Hull. L. 2016. Understanding the Castle Ruins of England and Wales: How to Interpret the History and Meaning of Masonry and Earthworks. North Carolina: McFarland.

McRae. A. 2013. How the Scots Won the English Civil War: The Triumph of Fraser’s Dragoons. Stroud: The History Press.

Osborne. M. 2014. Defending Nottinghamshire: The Military Landscape from Prehistory to the Present. Stroud: The History Press.