Posted on October 16, 2020 by fortifiedbritain 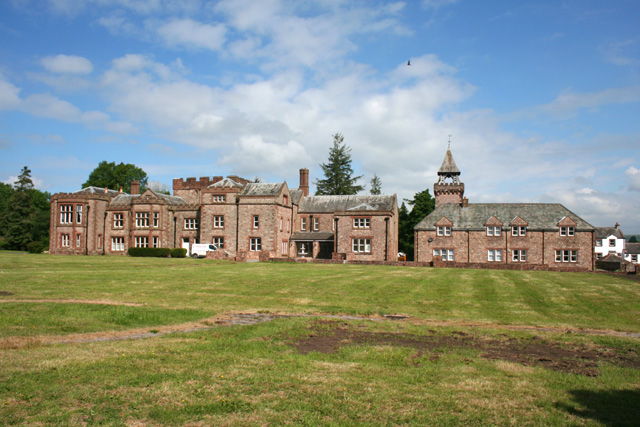 “Thou standest a monument of strength sublime,

A giant, laughing at the threats of time”

The Hall is a Pele Tower/fortified tower house, and named after the original owners, the Irton Family, who held it until the male line died out.

The Hall was the Manorial seat of the Irton family, and it sits near the River Irt. It is a quadrangular tower made of local granite which measures about 10 m by 6.7 m and stands 20.1 meters high with the walls 1.7 meters thick. The top is castellated. There are extensive views form the Hall across Cumbria, to the Isle of Mann and to Scotland.

Originally it comprised of two storeys with a basement which contains a vaulted ceiling. There is a chimney in the west corner and a newel staircase in the south corner. The first floor held the main hall. There was possibly a defensive ditch or structure around the outer perimeter of the site. A ditch does remain in the park and this may belong to earlier fortification of the site, and it was recorded that there were ‘8 towers of Irton’ (Jefferson 1842).

The extended Hall was once home to an extensive library called the Irton Hall Library, but all the contents were destroyed once the family line died out, on a great big bonfire in the grounds!

Here is the timeline of the site and the amazing people associated with it.

1096                   Adam is recorded in texts as having been a Knight’s Hospitaller who accompanied Godfrey of Boulogne to the Holy Land where he apparently killed a Sarsen General hence the images of Sarsens at Irton Hall.

*                          Hugh d’Yrton was succeeded by his son Edmund, who went on Crusade with Richard I. Unfortunately, he died on the Crusade. He had married the daughter of Edmund Dudley before heading off and produced a male heir, Stephen.

*                          Stephen d’Yrton succeeded his father to Irton Hall. He married Jane Dacre and produced three sons – Roger, Randolph and Thomas. Roger was the heir; Randolph went into the Church. He began as a priest at Rouen in Normandy, then was Prior at Gisburn. He was a confidential Commissioner to Edward I, and instrumental in the marriage between Prince Edward and Queen Margaret of Scotland.

*                           Roger succeeded William. He married Susan, the daughter of Sir Alexander Braithwaite, who was killed at the Battle of Dunbar in 1296. With the marriage came the manors of Basinthwaite, Loweswater and Unthank. The marriage produced a son, Adam.

1825                   Samuel married Eleanor, 2nd daughter of Joseph Tiffin Senhouse, of Calder Abbey. They produced no heirs. During his lifetime he relocated the entranceway of Irton Hall.

1872                     Irton Hall was sold to Mr. J. L. Burns-Lindow of Ingwall. The infamous Library of Irton Hall was burned, along with many of the documents relating to the Irton family and their history at the Hall through the generations. He remodeled and enlarged the Hall, added the west wing, removed the Irton coat of arms, and rebuilt the stables.

This site has such an amazing history, and the family really did stay the course. Such a shame that the line died out. Most distressing, I believe, was the burning of the family documents and the history of the site. A real loss to the nation.

Burke. J. 1836. A Genealogical and Heraldic History of the Commoners of Great Britain and Ireland, Enjoying Territorial Possessions or High Official Rank: But Uninvested with Heritable Honours, Volume 3. Henry Colburn.

Lewis. M. 2015. The Wars of the Roses: The Key Players in the Struggle for Supremacy. Amberley Publishing Limited.

Parker. MD. C. A. 1926. The Gosforth District: Its Antiquities and Places of Interest. Titus Wilson & Son.

Pettifer. A. 2002. English Castles: A Guide by Counties. Boydell & Brewer.

Shirley. E. P. 1866. The Noble and Gentle Men of England; The Arms and Descents. John Bower Nichols and Sons.

Whellan. W. 1860. The History and Topography of the Counties of Cumberland and Westmoreland: With Furness and Cartmel, in Lancashire, Comprising Their Ancient and Modern History, a General View of Their Physical Character, Trade, Commerce, Manufactures, Agricultural Condition, Statistics, Etc., Etc. W. Whellan & Company.