Posted on August 7, 2020 by fortifiedbritain

Grimspound is an amazing Bronze Age settlement located on Dartmoor in Devon. It sits 450 m above sea level and covers an area of around 4 acres (16,000 sq. m).

The site includes hut circles (round houses) surrounded by a low stone wall.

The whole, says Mr. Rowe, presents a more complete specimen of an ancient British settlement than will perhaps be found in any other part of the island. (C Spence Bate 1872)

We do not know what the original name of the site was, for its current name was given to it by the Reverend R. Polwhele in 1797. We do, however, understand why he gave it at least part of its name – the word pound in Devon means settlement. So, we have Grims Settlement.

The location of the site suggests that it was not constructed as a means of defence, as it is overlooked on all sides. However, thought was put into its location – it is protected from the inclement weather of Dartmoor, sheltered and it slopes on all sides which is great for drainage, especially due to the amount of rain Dartmoor has.

The enclosing wall is constructed of local dry stone and measures 4-5 m thick and it is unclear how high it stood, but in some places it currently still stands to 1.7 m high, indicating it would have been quite a bit higher back in the Bronze Age. There may also have been a hedge or other items added to the wall to make it appear higher.

The entrance to the site is situated to the south east. It is paved, measures 5.5 m in length, around 2 m wide, and lined with megaliths. The size and length suggest that livestock could easily pass through.

There are 24 hut circles (also called Round Houses) at the site. Their average diameter is between 2.7 – 4.5 m, and their walls were around a meter thick. The double-ring walls were constructed of granite slabs placed upright and included a rubble infill. This would be due to the lack of wood in the area. Many of the huts had L-shaped porches, paved doorways, and a central hearth. The roofs were possibly topped with thatch or turf. One surprising find was that at several of the huts there were raised levels to the right of the entrance.

At one of the huts, labelled No. 3 by investigators, the two uprights still remain in place – incredible considering how old they are!

The hearths or cooking holes were found to include some granite pot boilers – these were heated stones which were added to pots to heat the contents.

The hearths also produced ash which was analysed and found to include twigs of oak and willow. There was some remains of peat too which could also have been burnt to provide warmth.

Within the enclosure was also found the remains of pens which were located up against the wall. These could have been used for stock, agriculture or even storage. There may also be the remains of some further pens situated to the south-east of the site.

The site received its water supply from a nearby stream,

By artificial cutting a small stream of water has been brought to the lower part of this enclosure. (Omerod 1876).

Through archaeology we know the site dates to the bronze Age. A time when humans were transitioning from the hunter-gatherer lifestyle and creating a more settled and sedentary one. The site wall may have been purely to protect their livestock – we may never know!

Artefacts uncovered at the site include

There is evidence that the site was reused however no date has currently be given for this. 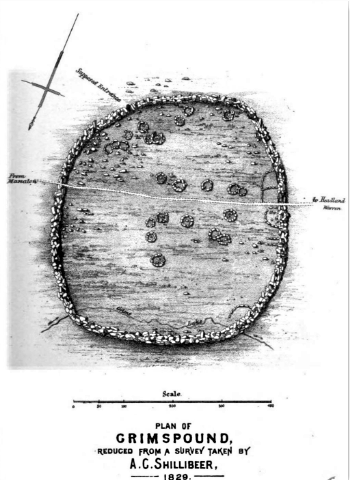 The timeline for the site is as follows;

1893         An archaeological exploration was undertaken by the Rev. Sabine Baring-Gould, and the Dartmoor Exploration Committee. 16 hut circles were explored. They also rebuilt part of the site and were heavily criticized for doing so.

1957         The barbed and tanged arrowhead was found just outside of the entrance.

Parts of the site are today eroding due to the large number of visitors. The public are not just visiting the site due to its archaeological importance, but also due to theories about its origin and uses,

Other theories of the sites usage have been a temple of the Druids, an Iron Age fort, a Roman town, a temple of the sun, a Phœnician settlement, a medieval tinners camp, a transhumance camp for shepherds, and a pound for stray cattle.However, a more recent idea was  muted in the 1920s by the Abbot of Buckfast Abbey who considered that Grimspound was a monastic hermitage built in the 7th Century. (https://www.legendarydartmoor.co.uk/grim_pound.htm).

Whatever your personal thoughts are about the site, you have to admit that it has a fascinating history. Defensive? Fortified? May be, may be not. The Bronze Age was a time of change and with the introduction of stronger and better weapons, there may have been a slight chance that it may have had a slight defensive aspect to it.

Greeves. T. 1985. The Archaeology of Dartmoor from the Air. Exeter.

Ormerod. G. W. 1876. Archæological memoirs relating to the east of Dartmoor. [5 papers repr. from contrib. by the author to various societies.].