Posted on November 6, 2020 by fortifiedbritain 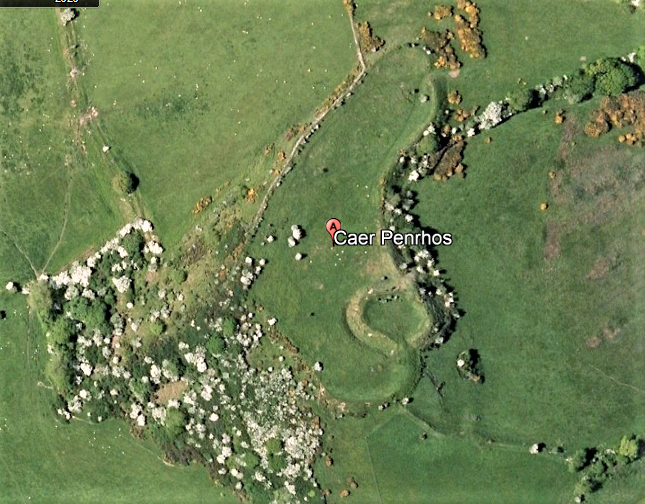 The site overlooks the village and has views across the Ystwyth Valley and mountains as well as Cardigan Bay in the distance. It comprises of a ringwork castle set within an iron Age hillfort.

Looking at the possible hillfort first….

It is believed to have its origins in the Iron Age (c.800BC-74AD) with a belief it was constructed at around the time the Romans started to encroach upon Wales.

It comprises of one large rampart with an outer ditch which encloses and area of approximately 4.2 hectares. There are natural slopes on all sides with the south west, west and north west having a steep drop. Sometimes described as triangular in shape, it bends around to the north east. Following the contour of the hilltop. The original entrance is located at the north east tip.

The early rampart was originally constructed in stone, and you can still see this on the south side of the site. It has been recorded that there appears to possibly be double ramparts located on the east side of the site, as seen in aerial photographs, in the way of cropmarks, but viewing the LiDAR (sorry I cannot include it here!) there do appear to be two faint traces of two more ramparts to the south.

Located at the north, north east of the site there are also traces of what appear to represent a Roman camp (Wish I could place the LiDAR here!)

The motte was constructed to the south east side with the remainder of the hillfort forming the bailey. The original ramparts appear to have been modified to cater for the addition of the motte measuring 2 meters high.

The Medieval ringwork measures c.40 meters x 25 meters. The additional internal ditch was cut into the rock and measures around 2 meters deep, with the rampart being 3.5 meters externally and 1.5 meters internally. The entrance to this modified section is located to the south.

Of the medieval addition there is evidence that there may have been more than one structure here.

Here is a timeline of what we know about the site

Cadwaladr’s family tree is as follows, 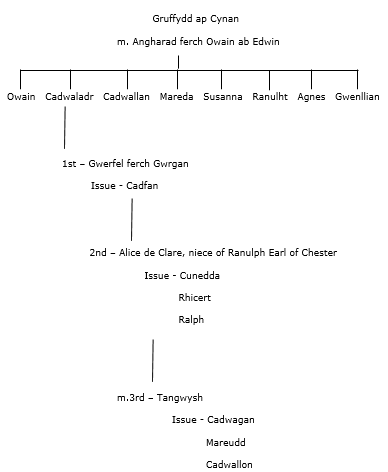 Burke. J., & Burke. Sir. B. 1850. A Genealogical And Heraldic Dictionary of The Landed Gentry Of Great Britain. H. Colburn

Carlisle. N. 1811. A Topographical Dictionary of the Dominion of Wales: Exhibiting the Names of the Several Cities, Towns, Parishes, Townships, and Hamlets … Compiled from Actual Inquiry, and Arranged in Alphabetical Order. Being a Continuation of the Topography of the United Kingdom of Great Britain and Ireland. W. Bulmer & Co.

Hilling. J. B. 2018. The Architecture of Wales: From the First to the Twenty-First Century. University of Wales Press.

Lloyd. J. E. 2004. A History of Wales: From the Norman Invasion to the Edwardian Conquest. Banes & Noble.

Rowlands. J. 1866. Historical Notes of the Counties of Glamorgan, Carmarthen and Cardigan: And a List of the Members of Parliament for South Wales, from Henry VIII, to Charles II. H. Bird.