Posted on October 9, 2020 by fortifiedbritain 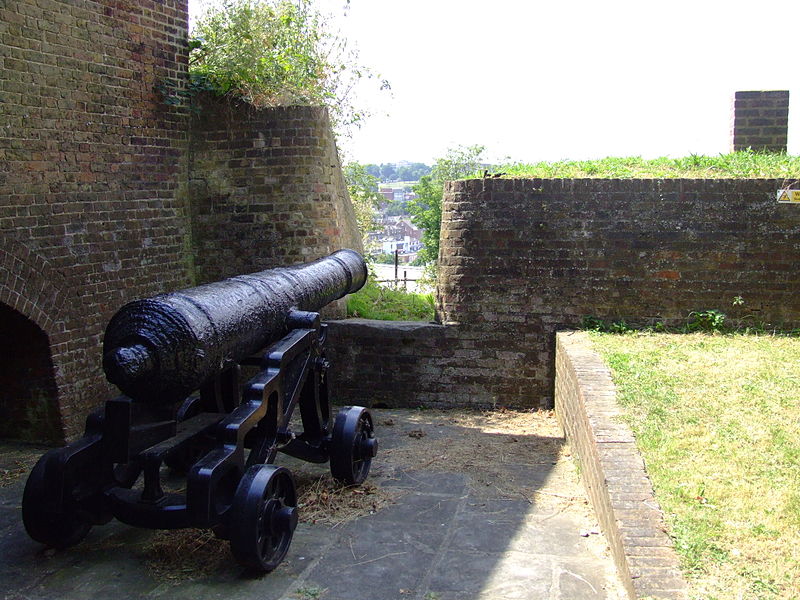 Fort Amherst is part of the Brompton Lines, a defensive line of forts and batteries protecting Chatham Naval Dockyard, situated on the River Medway, from a landward attack. The dockyard covered an area of 80 acres and had a lifespan from 1613 – 1984 when it was finally decommissioned.

Today the site is managed and run by the Fort Amherst Heritage Trust.

Fort Amherst is at the southern end of the Brompton Lines, which ran from Gun Wharf to Brompton Village. It is believed to be the largest of the Napoleonic forts built following the threat of attack from Dutch and French forces.

Originally constructed of Portland cement and brick, it was named after Lord Amherst. Some believe the site was built by French prisoners of war, but no concrete evidence has been found for this. During construction a number of archaeological features were uncovered including barrows, tumuli, and a Roman military building. Soldiers who undertook some later additions, were billeted close to the site.

The mock battles that used to happen at the site were described by Charles Dickens in his Pickwick Papers. He had watched one of the battles, as had Prince Albert. They were very popular for the tie, and possibly used as a recruiting tool for the Army.

1779                       During the strengthening of the Lines a Roman military building was uncovered. Finds included Roman coins. The works were recorded by the Royal Engineers and the North Lincolnshire Militia.

1802 – 1811        Prisoners extended the tunnels beneath the fort. Additions included barracks, a guard room, gun bastions, a new magazine, shelters and stores. Over 50 cannon were mounted on the site.

1804                     A new road was constructed which connected the Lines situated below Fort Amherst to Fort Pitt and included gatehouses at each end as added protection.

There had been a lot of debate about the site once it went out of use, for what it was intended. One debate in Parliament shows the feelings towards the site at around 1816,

“With respect to works, the best thing we could do was to sell the materials or suffer them to fall silently into the dust. The new kingdom of Chatham, as it had been called, was remarkable for nothing but its absurdity and expense: and we had better get rid of Fort Amherst, Fort Chatham and Fort Pitt, and all the other nonsensical forts.” (Ordnance Supplementary Estimates, Mr. Calcraft, 1816).

We are so glad that she was not demolished, and materials sold off, which has been the fate for many a fortified site once their usefulness had expired.

As previously mentioned, the site is now cared for by the Fort Amherst Heritage Trust. They do a great job in preserving the memory of the site and run some amazing programmes! Visit their site at https://www.fortamherst.com/.

Cusick. R. 2013. Wellington’s Rifles: The Origins, Development and Battles of the Rifle Regiments in the Peninsular War and at Waterloo. Pen & Sword.

Hasted. E. 1797. The History and Topographical Survey of the County of Kent, Volume 1. W. Bristow.

Powter, A. 1978. History, Deterioration, and Repair of Cement and Concrete in Nineteenth Century Fortifications Constructed by the Royal Engineers. Bulletin of the Association for Preservation Technology, 10(3), 59-77. doi:10.2307/1493668.

Sargent. A. 2013. The Story of the Thames. Amberley Publishing Limited.