Posted on April 1, 2022 by fortifiedbritain 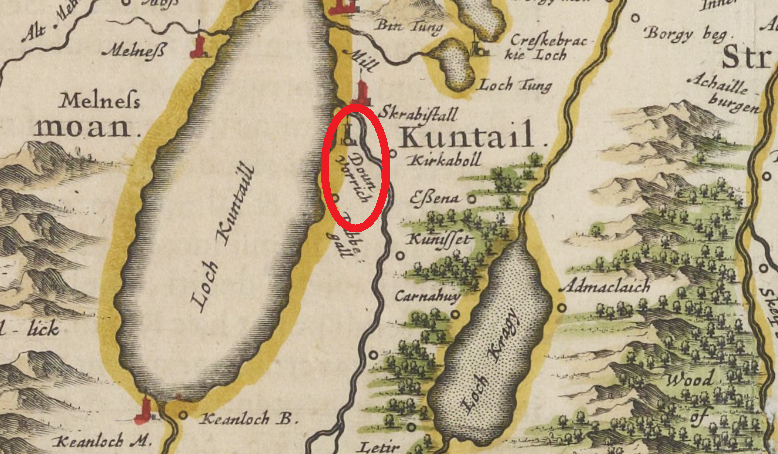 The site overlooks the Kyle of Tongue near its head on a small promontory and is associated with the Clan Mackay.

There is little known about its origins and history although it is rumoured, and legend has it, that there was another fort on the site before this pele was built – and it was constructed by the Norse men who were very active all along this coast. It is believed it formed part of the Norse colony and there are caves underneath.

These caves play a role in the site’s legend –

“Into this cave, it is stated, Ian Aberach was wont to retire in moments of danger. The cave is still called ‘leabaidh lan Abrach’” (Mackay 1892).

Of the structure itself, it is believed that it once stood two storeys high and included an attic. The ground floor was vaulted and not connected internally to the first floor. This gives the impression that, as was common in the past, it was used for livestock and/or horses. This ground floor had walls measuring 2m thick, a door to the outside and a narrow window, and the entrance was located in the north wall.

The first floor was reached vis an external staircase or ladder through the doorway in the south wall, and an internal ladder would have given access from this floor to the attic area. The internal area measured 4.27m by 3.96m and there was a window located in the eastern wall. On the north and south walls there are some long grooves, and although their purpose is unknown ot is believed that they may have held timber that supported the roof above the attic. A fireplace is located in the east wall.

All that remains is masonry up to first floor level.

It is understood that,

“Ian Aberach, famed in Sutherland for heroism and patriotism, resided in it, and his father, Angus Du, before him” (Mackay 1892).

As with these early sites in very remote locations, there is little known of their origins. The site is a Scheduled Monument, and hopefully in the future an archaeological investigation of the site can give us a better understanding as to the time it was built and the occupation levels.

There are legends associated with lost gold here, and I have also given, below, the accounts as close to the event as possible.

Benson, in his book North Coast Journey: The Magic of Scotland’s Northern Highlands (2018) tell us that, gold coins may be found in the Kyle of Tongue,

BUT….. before you grab your metal detector and rush up to the Kyle of Tongue – you best read on!!

Pococke tells us that,

“In 1746, when the Sheerness man of war ….had chased the “Hazard” sloop, which had on board 150 men and £13,000 for the Pretender, about three weeks before the Battle of Culloden, the want of which lessened their army, as it deprived them of purchasing provisions.

After they had run ashore accidentally on the Point, they fought for a short time. McForbes attacked them with about eight men….(Pococke 1887).

Very little information here, but what is of interest are the follow up stories presented. Now we all know history is written by the victors – so, keeping in mind the above account, read on…..

“The Hazard, a French ship carrying treasure for the Prince to the amount of 12,500 guineas, ran into the Kyle of Tongue pursued by a British frigate, on the evening of the 24th March. Through the night the crew and soldiers disembarked carrying the money, but next day Captain the Hon. George Mackay met them near Drum Nan Coup, and after a smart fight captured both men and treasure.

“Aberdeen, April 6. Captain Mackay, Lord Reay’s son, and Sir Henry Munroe, son of the late Sir Robert, both Captains in Lord London’s regiment, are just come hither with letters from Captain O’Brian of the Sheerness man of war, now off this place, giving an account that after chasing the Hazard sloop (called by the French the Prince Charles now) above 56 leagues, he drove her ashore and obliged the French and Spaniards who were in her to quit her and to land, which they did with five chests of money to the value of £12,000 and upwards, in order to join the rebels; but the Lord Reay in whose country they had landed, and at whose house Captain Mackay, Sir Henry Munroe, Lord (Captain) Charles Gordon, and Captain Macleod with some others of Lord London’s regiment, with about 80 men of the said regiment, who were driven thither by the rebells, marched out and attacked them, and after killing three or four, and dangerously wounding eight, took the remaining 156, officers, soldiers and sailors prisoners, who were immediately embarked on board the Sheerness, and the prize with the Highland officers and men who made the capture are now here ….. the money that was handed out of the Hazard sloop, was taken to Lord Reay’s men”

Perhaps the most accurate account of this incident is that reported in the Gentleman’s Magazine for 1746, and from which we give the following extract: –

“Edinburgh, April 9, 1746. Lord Reay who arrived in Leith yesterday gave the following account of the takin of the above ship [the Hazard]. On the 25th March, the Hazard sloop was observed by Lord Reay and his people sailing up the Tongue Bay, and was soon followed by Captain O’Brian in the Sheerness, who immediately attacked her. In the engagement the Hazard sloop had several men killed besides a good many wounded, and not being able to maintain the fight, she ran ashore at the shallows, where the Sheerness could not follow, and there landed her men and money. Lord Reay’s son, with some other officers, gather what men they could together, attacked those that had landed from the Hazard sloop, and after killing five of them took the rest prisoners and seized the money, said to be 12,500 guineas; but one chest of it was amissing and another broke. Lord Reay and his friends being apprehensive of a visit from the rebels, embarked with the treasure1, and prisoners, and arrived on Sunday night at Aberdeen with the Hazard sloop;….”

Note 1 – It is locally believed that some of the gold was thrown by the discomfited Frenchmen into Loch Hakon before they surrendered, and undoubtedly pieces of French gold have been found from time to time along its shore, but we do not think that much of the treasure was lost in this way.”  (MacKay 1906).

Slightly varying tales of what happened on that day, and we will never know the full story – but it is an interesting one, and I wonder what happened to that, apparently, missing chest of gold!!

Here is a very limited timeline for the site, and what I have managed to uncover.

1157                 According to the Orkneyinga Saga at this date… (Anderson 1873): “The words “at Bernvik” in Jonǽus’s edition are not in the Flateyjarbók. Two places of this name are mentioned in the Sage. One of these is plainly Berwick-on-Tweed (cap. xcii). The locality of the other (which must be the “Beruvik” of this passage) is fixed by the statement in cap.xciv., where it is said that Earl Rögnvald was then in Sutherland celebrating the marriage of his daughter with Eirik Slagbrellir; and when word was brought to him that Harald had come to Thurso, he rode with a number of his followers :from Beruvik to Thurso”. It has been conjected that the place here indicated was Caistel a Bharrwick, an old square tower situated on an eminence near Kirkiboll, on the east side of the shore of the Kyle of Tongue (Orig. Parochiales, Vol. ii. p. 717).”

This may be a small and, some may say a fairly insignificant site, but it has a fascinating history, from the Norse landings through to modern day billionaires. Let’s hope that we can uncover some more of its past soon!

Cordiner. C., Torfaeus. T., & Torfason. P. 1780. Antiquities & Scenery of the North of Scotland, in a Series of Letters, to Thomas Pennant, Esqr. No Publisher Stated.

MacGibbon. D., & Ross. T. 1887. The Castellated and Domestic Architecture of Scotland from the Twelfth to the Eighteenth Century, Volume 3. D. Douglas.

No Author. 1855. Origines Parochiales Scotiae: The Antiquities Ecclesiastical and Territorial of the Parishes of Scotland · Volume 2, Issue 2. W. H. Lizars.