Posted on April 23, 2021 by fortifiedbritain 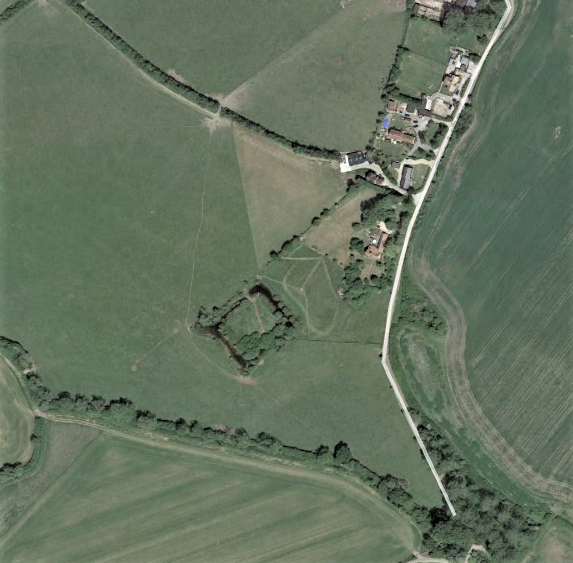 The moat measures 70 m by 60 m and originally stood in the Forest of Bernwood.

Little is known of the actual site, but there are some very interesting stories relating to the people who once held the manor.

William Peverill – Legend states that he was the illegitimate son of William the Conqueror, but this is still to be proven. William Peveril the Elder came to England with William the Conqueror and is listed on the Roll of Battle Abbey. William presented the manor to the Knights Hospitaller of St John of Jerusalem. The lands are mentioned as belonging to him in the Domesday Book.

Knights Hospitaller of St John of Jerusalem – The Hospitallers were founded to care for the pilgrims that came to the Holy Land, who usually arrived in poor shape or unwell from their long journeys. They kept a hospital for this purpose at in 1113 were granted a Papal Bull acknowledging them and their name. They conducted themselves under strict rules. William Peveril granted them the site, but It is not known how long they held it.

Henry de Chequers (de Scaccario) – The de Chequers family was a well-known family in Buckinghamshire. They were the builders of Chequers – the home of the British Prime Ministers. Associated with them is the Dormer family, and as you can see from the family tree, Sir William Hawtrey married Winifred Dormer, and Winifred’s brother married Dorothy Hawtrey – a lot of love amongst those families!!

Algernon William Stephen Temple-Gore-Langton, 5th Earl Temple of Stowe – Born in 1871 and passing in 1940, Algernon was a JP for Somersetshire, late a Lieutenant of the Coldstream Guards, and Captain of the 3rd Battalion, Somersetshire Light Infantry. His portrait, in Army uniform, hangs in the National Portrait Gallery.

Timeline for the site through the information relating to the families who held the land,

1199                 King John confirmed the gift of the manor farm from William Peveril to the Knights Hospitaller of St John of Jerusalem.

Married Sir Frances Wolley and died childless. and her share of the lands passed to her two sisters.

As you can see, the site has had some colourful owners. As far as I have been able to research, there has been no actual archaeological work carried out on the island of the moat. A lot of its history will be unfolded once this is undertaken, but until then, we can only guess as to who actually held the piece of land that the moat is located upon.

Shearhan. J. J. 1862. History and Topography of Buckinghamshire Comprising a General Survey of the County, Preceded by an Epitome of the Early History of Great Britain. Longman, Green, Longman, and Roberts.