Posted on December 3, 2021 by fortifiedbritain 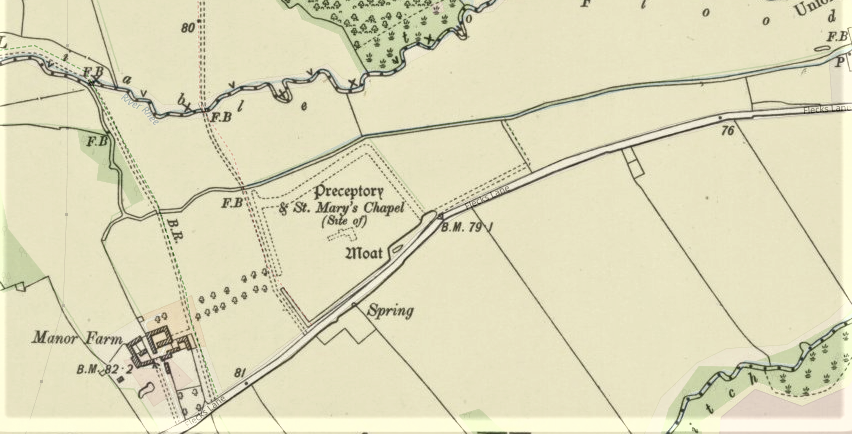 The Shingay Hospitallers Preceptory was an early Preceptory site and one of the first in England for the Order. The site is protected by a moat, and the brethren controlled the nearby waters of the River Cam to the site, to feed the moat and also for their mill.

Shingay Preceptory originally covered 40 ha, and included a main hall, chapel, ancillary buildings, fishponds, two dovecotes, watermill, a windmill, bank, ditch, and a moat. The exact layout of the site is still unclear, but a geophysical survey was undertaken in 2013-2014 which gives a rough outline of some of the underlying structures still present. Many earthworks still remain and some stand to approximately 0.60m high. The moat itself encloses an area measuring 208m by 144m.

The lands were originally held by Goda of Earl Alfar, the river Cam runs to the north of the site and it stands 3km from the Old North Road, a busy thoroughfare throughout time.

Originally the church patron was the Abbot of Sees, France, but this was later handed to the Knights Hospitaller as part of their lands and holdings. Shingay also held lands in 42 parishes, as well as in Buckinghamshire, Bedfordshire, Essex, Huntingdonshire, and Hertfordshire. 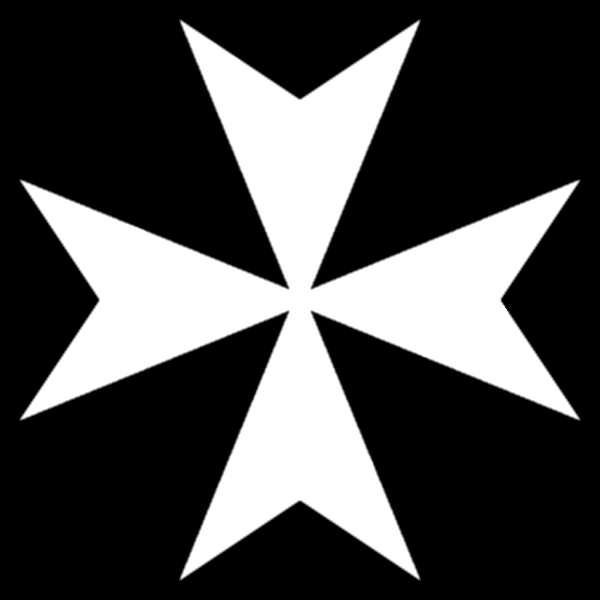 Set up as a place of administration, agriculture, and with a small hospital to treat the sick, the preceptory also originally housed a Nunnery Cell of the Sisters of St. John. Two sisters named Amabilis and Amice de Malketon were the nuns, they were shortly relocated in 1177 to the Orders main Nunnery at Minchin Buckland in Somerset.

The sick who were tended to at Shingay were fed a diet of meat three times a week, they also received bread, eggs, milk, butter, fresh foods, and beer daily. They were supplied with clean bedding and were housed separately from those of the Order. For the time this was something of a luxury, and the Hospitallers certainly knew about cleanliness and a good diet to treat the sick and injured, and to speed their recovery.

The Shingay site appears to have lost its charm and importance at the Dissolution. Henry VIII granted the lands to his Master of the Hawk, Sir Richard Long, and therein lies its demise. We know there was some dispute as to the site and Thomas Dingley, the last person of the Order who should have been the Preceptor, but who never held the title owing to his attendance on the Pilgrimage of Grace. Having been arrested and executed Thomas Dingley lost all he was attempting to gain at the Dissolution. The following piece gives an insight into the dealings of the day,

Doubtless not he will be his good lord in the controversy between him and Mr. Dyngley for the commandry of Shingay in Cambridgeshire. As it will appear by a writing which my brother the bearer will show you the Religion has given it me for my “melliorment,” and has collated the commandry that I have possession of to another gentleman. If Dingley has it, no man will be preferred but himself, for he would then keep two commanderies, besides a member that he has out of the prioralty worth 40l. a year, and a pension out of another commandry of 100cr. Of the sun. No man for little time serving the Religion is so rewarded. He should be content and not seek means to break the ancient style and custom of the Religion.

My Lord of St. John’s lately received a letter from Malta, which he should deliver to the king with credence for certain news from those parts. The gentleman who should during the news is fallen sick in France, and till he come my Lord can know nothing. Being troubled with gout he gave the letter to Cave to deliver, and if Cave were in health, he would have come himself. Sends two carpets as gifts.

The personal answers of Sit Thomas Dyngley to the positions of Sir Ambrose Cave. 1,2 and 3 he believes are true. 4 and 5, gives his opinion upon the right of the Great Master of St. John’s to give away commandries without the advice of his convent. 6 and 7 are true; 8, 9 and 10 utterly untrue, 11 is in peaceful possession of the commandry of Shingay; otherwise, the article is untrue. 12,13, and 14, he refers to the king’s commission, and the acts of the court. 15 and 16 is a native of Southampton.

As can be seen, there is a case being made as to why Dingley should not be allowed to be in charge of two commandries, and especially as he had not, apparently, been with the Order for a long time. It does make it sound as though Dyngley is being a tad greedy in relation to the payments he would receive if he held both sites. Little wonder then that he was executed and both commandries taken and given to those close to Henry VIII.

The Dissolution was, lets face it, a land grab for Henry VIII. It also enabled him to get his hands on the wealth of the Church held within those sites in England. Does this action then place him on the same footing as Philip of France who had the Knights Templar overthrown just so he did not have to repay the loans he had taken out with them? A whole new can of worms opening there!

Here is the known timeline for Shingay Hospitallers Preceptory,

1130         Sybil, daughter of Roger de Montgomery, and wife of John de Reynes, gave the land and founded the Preceptory, dedicated to the Virgin Mary.

1144-1162  Walter was the Prior. He was the first Hospitaller Prior in England and this was the third site set up for the Order in the country.

1177         Two nuns, sisters Amabilis and Amice de Malketon were located at the site as part of the Nunnery Cell of the Sisters of St. John.

1199         A Charter of King John confirms the lands in the possession of the Knights Hospitaller, gifted to them by Sybilde Reynes.

1209-1213  During the Papal Interdict placed on England by Pope Innocent III, people who died could be buried at the site, as they were not allowed to be buried in consecrated ground.

1279         A relative of Ralph Pyrott, Lord of the Manor of Sawston who was lent 80 quarters of Barley, in the way of a loan, defaulted on his loan and the Church at Sawston came into possession of the Shingay, for payment.

1312         Wendy Church came into the possession of the Preceptory after the holders, the Knights Templar, were disbanded.

1338         Shingay Church became part of the Preceptory. Philip Thame was Preceptor and Shingay was recorded as being the fourth wealthiest Hospitaller site in England.

1371         The General Chapter of the Hospital in England met at Shingay on 12th June and the 28 October this year. Raymond Berenger was the Grand Preceptor, and Roger de Dinibus was the Vice General of England. Both were present for the General Chapter meetings. John Paverley is recorded as being the Prior, and John de Dampford was the Preceptor of Shingay. Present at the General Chapter were,

1421         Thomas de Skipwith was appointed Governor of Cyprus for the Order of the Knights Hospitaller.

1452         The Hospitallers continued to enclose their lands and finally evicted everyone from the old Medieval village of Shingay. The church no longer supported the vicar but the Order supplied a chaplain and kept all the revenues.

1536         Edward Hill/s Preceptor, died, and Thomas Dingley was appointed Preceptor to replace him.

1536         The Brethren in Malta petitioned Henry VIII to keep Shingay as a Preceptory for the Order.

1539         Thomas Dingley attained the position as Preceptor, but later was arrested and executed for taking part in the Pilgrimage of Grace. The Commandry was dissolved with the Dissolution of the Monasteries under Henry VIII. Henry VIII granted the site to Sir Richard Longe, Master of the Hawk.

1541         Sir Richard Long granted the property to his wife, Margaret. Aw chaplain as provided to the church.

1561         Unitl: Margaret Long lived in the old preceptory buildings. When she died later this year the property went to her son, Henry Long.

1573         Henry Long died and the property went to his daughter Elizabeth, wife of Sir William Lord Russell, Baron of Thornhaugh.

1601         Sir William Lord Russell, Baron of Thornhaugh, made alterations to the Hall, and renamed it Shingay Hall, later to be called Shingay House.He added new windows, a new staircase and rebuilt a number of the older rooms. The old hall included a Hall area, dining room, a two-storey porch and a great chamber.

1643         Some of the old Preceptory buildings were still standing, and the chapel was still in use.

1646-1670  The property was held by John Russell, third son of Francis and Elizabeth Russell.

1688-1746  Records from the Courts held at the site survive in the National Archives.

1697         The old chapel was still in use but was pulled down later in the year along with other buildings on the site. A new small chapel was built by Lord Sandys. The monument to Sir Richard Long was relocated to Hengrave in Suffolk.

“This is only a small chapel consisting of one room paved with black and white marble about the later which is on one step: the rest with free stone. The pulpit stands on the South Side between the two windows. The church or chapel has only one small bell in a little turret at the West end. There are no inscriptions or monuments in or about the church which stands close to the new house by the old Commandry. It is only a Curacy and dedicated, at least the old one, to the Honour of the Blessed Virgin and belonged anciently to the Knights Templar of this place ” (Shimield 1889).

1727         Edward Russell, Vice Admiral of England was created Baron of Shingay, Viscount Bonfleur and Earl of Orford died without issue, and the site was held by Samuel, Lord Sandys.

1796         Materials from the demolition of the buildings were sold and Manor Farm still shows some of the old original stonework.

1820         “The whole parish of Shingay was the property of the patron of the benefice, an adjoining landowner. Cira 1820 he carted away the church, churchyard wall, and gravestones to provide farm buildings, and absorbed the whole of the glebe. The churchyard and glebe are let as part of a farm, the vicar’s income has ceased, no vicar is appointed, and the people are deprived of their church privileges” (Rowe 1882).

Shingay is an amazing site, and it would be of benefit to learn and understand more of its unique history if a full excavation could be undertaken.

Note from the following aerial images of the site how it has changed through a few short years. Follow the shadows, the water, and the lumps and bumps within the landscape, and you can see how it may have changed over the past few hundred years. A site well worth the cost of further investigation.

De Thame. P. 1857. The Knights Hospitallers in England: Being the Report of Prior Philip de Thame to the Grand Master Elyan de Villanova for A.D.1338. Johnson Reprint.

Moll. J. A. 2006. The Military Orders and the Reformation: Choices, State Building, and the Weight of Tradition. Verloren.

Struckmeyer. M. 2006. Female Hospitallers in the Twelfth and Thirteenth Centuries. A Dissertation. University of North Carolina.