Posted on July 2, 2021 by fortifiedbritain 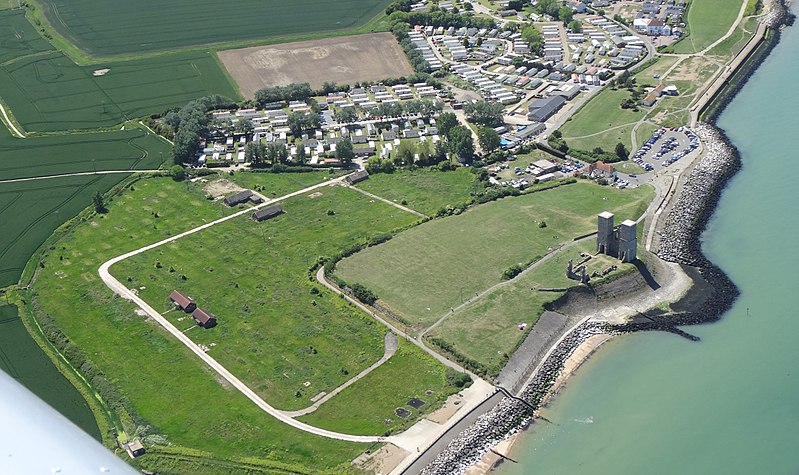 The fort covered around 3.2 hectares. The walls measured 3m thick at their base narrowing to 2.5 at the top and stood 4.5m high. Defences included two ditches outside of the walls, measuring 10m wide. There were the usual four entrance gates which were single in width. The north and the west gates have now been lost to sea erosion of the site. Archaeology has shown that the gateways had square towers. Sections of the south wall remain today.

The fort was constructed to guard the approach to the Thames Estuary and also the northern end of the Wantsum Channel – the stretch of water which once separated the Isle of Thanet from mainland Kent. A road led from the fort to Canterbury – Durovernum Cantiacorum of Roman times.

The site would originally have included a vicus – a settlement which grew up outside of the fort, populated by local people who serviced and supplied the fort. Archaeologically this has been shown to have once existed to the north and west of the fort, the area now lost to sea erosion. The fort would also have included a harbour, but its whereabouts is still unknown.

The remains of 10 infant burials have been discovered at the fort. These may have been for ritual purposes, but this is unclear. A baby’s feeding bottle has also been recovered along with 25,000 other finds! One of the best finds, for me personally, is a seal of one of the vicars of Reculver Church.

Other finds include coins, parts of Roman cross bars from a vexillum, or standard.

The site still has a lot to tell us, however, unfortunately the sea has stolen a lot of that history and it now awaits rediscovery on the sea bed, covered by sand – one for maritime archaeologists to uncover!

Here is a timeline for Reculver,

892                   Large Danish army camped on Thanet. The minsters of Reculver, Minster in Thanet and Lyminge were all affected by this incursion,

1802                 Vicar C. C. Nailor had most of the old church pulled down to use as buildings material for the new church he was given permission to construct at Hillborough, nearby.

Camden. W. 1610. Britain, or, a Chorographical Description of the most flourishing Kingdoms, England, Scotland, and Ireland. George Bishop and John Norton.

Duncombe. J. 1784. The History and Antiquities of The Two Parishes of Reculver and Herne, in The County of Kent. J. Nichols.

Foot. S. 1999. Remembering, Forgetting, and Inventing: Attitudes to the Past in England at the End of the First Viking Age. Transactions of the Royal Historical Society, Vol. 9, pp. 185-200.

“Houses of Benedictine monks: The abbey of Reculver,” in A History of the County of Kent: Volume 2, ed. William Page (London: Victoria County History, 1926), 141-142. British History Online. Available at https://www.british-history.ac.uk/vch/kent/vol2/pp141-142.

Hussey. A. 1852. Notes on the Churches in the Counties of Kent, Sussex and Surrey. A. Hussey.

Murray. J. 1858. A Handbook for Travellers in Kent and Sussex. John Murray.