Posted on May 7, 2021 by fortifiedbritain 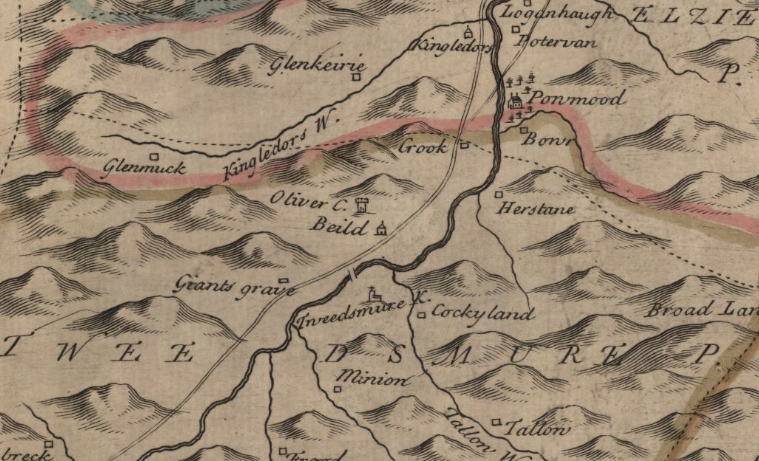 The exact location of the site is unknown, but stone from the original tower was used in the construction of the large house of the same name. The supposed site is located south west of Oliver’s Castle Hill Fort.

The area of the Tweed valley was once of the so-called lawless areas during the English wars against Scotland. Spread along either banks fo the Tweed River were a number of Tower Houses/Castles/Pele Towers, and Oliver Castle was one of them.

Located on one side was Drumelzier Tower and on the other was Tinnis, or Thanes, Castle. This string of towers, which comprised of many more not mentioned here, communicated with each other via a beacon. During the night this was done through fire, and at daytime, through the use of smoke. When these were lit, it was a call to arms for all of those who saw it.

Most famously known for its associations with the Clan Fraser as their main residence, it also has ties with the Tweedie family. The original Pele tower was one of the oldest original homesteads within the area.

The Fraser family were totally wrapped up in the battles with Edward I of England. Unfortunately for Simon Fraser, he was captured, sent to London, tortured and executed in a totally barbaric way. This brave gentleman had fought at Roslin, where three divisions of Edward’s army were beaten – Simon Fraser was known as The Hero of Roslin.

The Fraser family also held nearby Niedpath Castle, of which there are still remains today.

So, as with sites that have very little known history, we have to look at the people who held them, and their colourful lives. The following timeline is not a complete one in regards the exploits of the Frasers, but the most noteworthy events are mentioned.

Timeline for the site and its owners,

1489                 Held by William Tweedie of Oliver Castle. William and Lawrence Tweedie took Thomas Porteous to court for stealing 74 lambs from their property.

Archaeologically, thumbscrews were found in the area of the proposed site for Oliver Castle – an interesting artefact! Were they used on the English or Scottish side? We will never know, but they are certainly a reminder of the way punishment and torture were handed out in those turbulent times of unease along the Borders.

Click on the title for this poem  – The Lord of Oliver and Neidpath.

Anderson. W. 1877. The Scottish Nation: Or, The Surnames, Families, Literature, Honours, and Biographical History of the People of Scotland. Volume 2. A. Fullarton & Company.

Bannatyne Club (Edinburgh, Scotland). 1850. Origines Parochiales Scotiae: The Antiquities Ecclesiastical and Territorial of the Parishes of Scotland. The Bannatyne Club.

Fraser. A. Baron Saltoun. 1879. The Frasers of Philorth. Volume 1. Printed for private circulation. No printer name given.

Low. A. 1856. Scottish Heroes, in the Days of Wallace and Bruce. Volume 1. Hurst and Blackett.

Smibert. T. (ed.). 1850. The Clans of the Highlands of Scotland: Being an Account of Their Annals, Separately & Collectively, with Delineations of Their Tartans, and Family Arms. J. Hogg.

Taylor. J. 1858. Edward I of England in the North of Scotland. Robert Jeans.

Tytler. P. F. 1866. The History of Scotland from the Accession of Alexander III. to the Union. Volume 1. Nimmo.

Veitch. J. 1893. The History and Poetry of the Scottish Border: Their Main Features and Relations. Volume 1. William Blackwood & Sons.