Posted on September 3, 2021 by fortifiedbritain 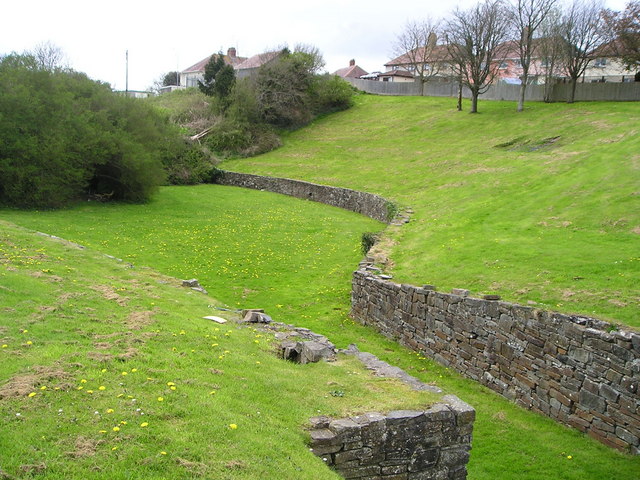 It is generally known that the name translates to Sea Fort, or Fort by The Sea. This is due to its location on a peninsula overlooking the River Towy, a tidal waterway. Waterways were of such importance to the Romans for moving men and goods throughout their Empire. It is recorded that the River Towy was used by the Roman Navy, the Classis Romana.

The site is believed to have originally been the tribal centre for the Demetae Tribe and is mentioned in Ptolemy’s Geographica (a second century gazetteer and atlas of the Roman World), as being such. The original site of the Demetae would have been a hillfort, as was common for the time.

The Roman fort, mentioned in Ptolemy’s Antonine Itinerary, had been shown through archaeological investigations to have included the usual fort buildings and there is good evidence of a Bath House and a granary. There was also an Amphitheatre located to the north of the site and a cemetery to the west.

The granary was built of timber and measured 4 meters by 5 meters, and it has been shown through a burnt layer in the stratigraphy that the building was destroyed by fire.

The Amphitheatre was constructed in stone and shows evidence of having had wooden seating by means of timber revetted steps. The seating area circumference measured 92 meters by 67 meters, and the internal arena area measured 46 meters by 27 meters.

During the second and third centuries archaeology has shown there were 4 distinct phases of occupation by the Roman Army. During the initial phase a turf revetted clay rampart was thrown up measuring 5 meters wide, coupled with a 4 meters wide V-shaped ditch, measuring approximately 1.5 meters deep. This added protection for the garrison.

There is evidence of this initial fort being demolished and another built in its place. This second phase included a stone revetted rampart constructed of earth and clay and measuring approximately 5.8 meters wide. Again, this was coupled with a V-shaped ditch measuring 5.5 meters wide and around 2.7 meters deep.

Once the military withdrew, and the site became a civitas, or Roman town, which possibly grew from the vicus attached to the fort. When the town was fortified, the Roman ditch was filled in with material from the rampart and a new area was walled. This new town wall again had a rampart in front of the ditch which measured around 1.6 meters thick, giving a total thickness of the surrounding fortifications being 17.7 meters.

The size of the town and its defences demonstrates that it was an important site. And one of the buildings which has been excavated is a Romano-Celtic Temple which measured 23m2. This building may not have been completed as it was abandoned in mid second century, when the military withdrew.

Here is a short timeline for the site,

The archaeology of the site is very interesting. Although there is evidence of the Roman army, there is also, as would be expected, an abundance of everyday items relating to life in Roman Britain.

Pottery – An abundance of pottery was found at the site and includes, but is not limited to – course pottery, Romano-British grey ware, mortaria, Samien ware and jars.

Coins – over 110 coins have been found at the site.

Burials – Burials have been located at the cemetery and include a cremation urn of Romano-British grey ware which included the remains of a possible female.

For a more detailed description of excavations from 1978-1993 click on the following link – https://archaeologydataservice.ac.uk/library/browse/issue.xhtml?recordId=1161486&recordType=MonographSeries.

RIB 413 – An alter dedicated to Fortune.

Clifford. W. 1879. On the Course of a Roman Military Road Through Somersetshire. Proceedings of the Somersetshire Archaeological and Natural History Society. Volume 24, pp. 22-31.

Taylor. I. 1882. Words and Places: Or, Etymological Illustrations of History, Ethnology and Geography. Macmillan and Company.