Posted on June 4, 2021 by fortifiedbritain 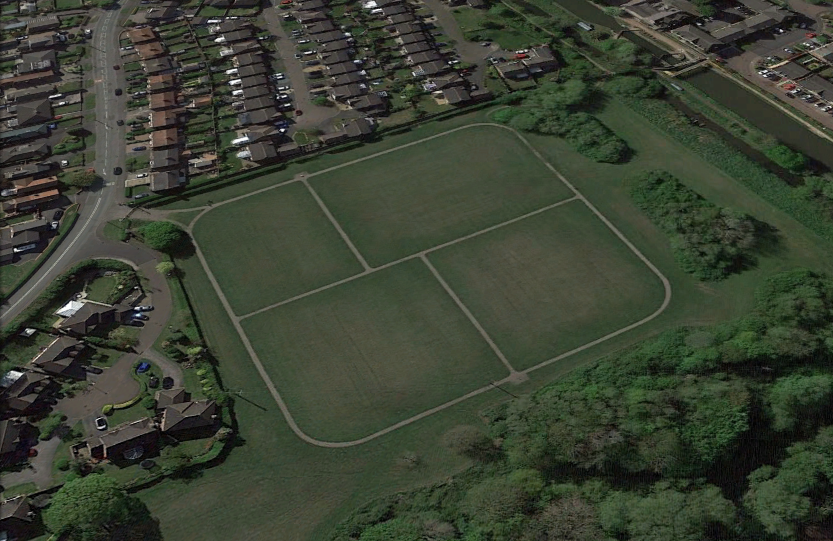 Situated just north of Middlewich, the Roman fort would have housed between 500-1,000 men. It is almost square and measures 110m by 125m and has rounded corners. There is archaeological evidence of the usual entrances on each side of the fort. The site was originally defended by a rampart and ditch.

A vicus is believed to be located just south of the fort where evidence of leatherworking, metal working and tanning have been uncovered. There is also further evidence of industrial work, mostly salt production for which the area is still known for today. Salt was an important commodity in Roman times and expensive, used mainly for food preservation.

Five Roman roads met near the site, but there is some speculation over this. There was definitely a Roman Road that connected Middlewich with Northwich. Archaeological evidence shows that Middlewich was an earlier fort than Northwich.

Other forts close by were Chesterton, Whitchurch and Wilderspool, each being one day’s march from Middlewich.

A majority of this fort still lays buried and as such holds onto its history. We do know that it was possibly garrisoned by an Ala Classiana cavalry regiment in 105 AD, as this is mentioned on the Military Discharge Diploma found nearby. There again – it may have been dropped by someone passing through……

In 2006 the Heritage Lottery Fund granted some funds to research the area.

The archaeology of the site, to date, is interesting and includes the following,

Baines. T. 1869. Lancashire and Cheshire, Past and Present: A History and a Discription of the Palatine Counties of Lancaster and Chester, Forming the North-Western Division of England, from the Earliest Ages to the Present Time (1867). Div. 1. Volume 1. Mackenzie.

Hills. G. M. 1881. The Measurements of Ptolemy and the Antonine Itinerary, Applied to the Northern Counties of England. Journal of the British Archaeological Association, Volume 37, (1881), pp. 360-415.

Jewitt. L. 1863. Notice of a Roman Milestone Recently Found at Buxton and of the Roman Roads in That Neighbourhood. The Reliquary and Illustrated Archaeologist: A Quarterly Journal and Review Devoted to the Study of Early Pagan and Christian Antiquities of Great Britain. Volume 3 (1863), pp. 207-217.

Wood. I. 1850. Kinderton, Near Middlewich, is the Condate of the Roman Itineraries. Journal of the Architectural, Archæological, and Historic Society, for the County, City, and Neighbourhood of Chester. Volume 1. (1857), pp. 44-50.