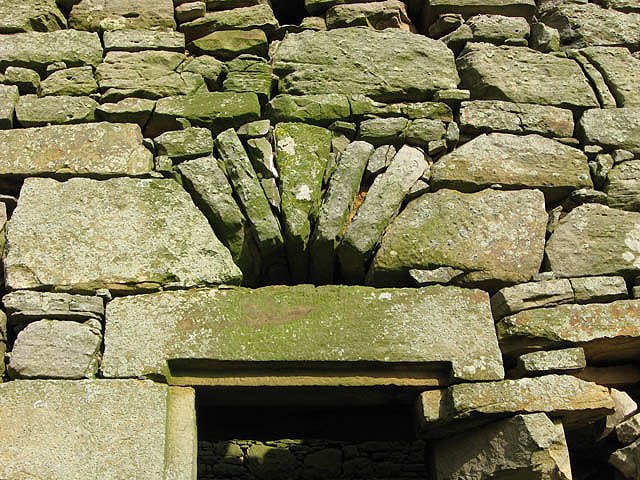 Sited above Old Jedworth town, the tower has extensive views in all directions. Mervinslaw Tower is adjacent to an ancient woodland which included oak trees that may have been planted by its owners. Originally there were additional buildings alongside and around the tower.

On the east are the steep banks of Edgarstone rivulet, and on the south west the swampy ground ascending into Carter Fell (Jeffrey, 1855).

The structure consisted of two storeys, is oblong in shape measuring 7.7m by 6.5m, with the walls being 1.2m thick. The remaining walls stand to a height of 5.48m. The entrance was located at ground floor level to the south east, but there was also an entrance, via a ladder or wooden staircase, to the south west. With this in mind, and the above quote by Jeffrey placing it within its landscape, you can see the perfect siting of this tower for defence and security for its owners and occupiers. Although dating from the sixteenth century, the lands were significant in the history of Scotland.

There is hardly any written and documentary evidence for the site, however, it is associated with the Riddell/Ridel family and they were very prominent, especially during the reign of William I of Scotland. The family originated from Normandy with their ancestor Sieur de Riddell who came over to England in 1066 with William I, the Conqueror.

Here is a timeline for what is known of the site, and the Ridel family.

1124-1153          Zearwingnslaw (believed to have been the original name for Mervinslaw) was mentioned in Charters of David I of Scotland.

My own opinion is that the pele tower was most probably built by Baron Andrew Riddell, or his father Walter.

Archaeologically the only information I have managed to find relating to the site, and its area was a sword pommel discovered in 1977. It is believed to be of Medieval date and may possibly have connections to the site, however, there is no evidence that it has – so I will leave that one up to you to draw your own conclusions. Also, within the area, has been uncovered the top of a flagstaff which was stone and plated with bronze.

Bouyssou. R. 2020. Over Hill and Dale in the Border Ballards. In Besson. F. 2020. Mountains Figured and Disfigured in the English-Speaking World. Cambridge Scholars Publishing.

Chalmers. G. 1807. Caledonia, Or an Account, Historical and Topographical, of North Britain; from the Most Ancient to the Present Times, with a Dicitionary of Places, Chrorographical and Philological, Volume 1. T. Cadell & W. Davies.

Jeffrey. A. 1855. The History and Antiquities of Roxburghshire and Adjacent Districts, from the Most Remote Period to the Present Time. Volume 2. T.C. Jack.

Riddell. J. 1843. Stewartiana, Containing the Case of Robert II and Elizabeth Mure, and Question of Legitimacy of Their Issue. T.G. Stevenson.

Shennan. J. H. 1892. Boundaries of Counties and Parishes in Scotland as Settled by the Boundary Commissioners Under the Local Government (Scotland) Act, 1889. W. Green.

Webb. N. 2004. Settlement and Integration in Scotland 1124-1214. Local Society and the Development of Aristocratic Communities: With Special Reference to the Anglo-French Settlement of the South East. PhD Thesis. Department of Medieval History, The University of Glasgow. Glasgow.