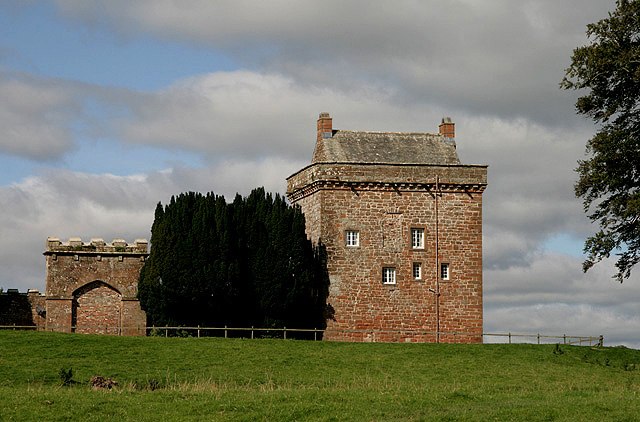 Situated in an area of the Borders known as the Disputed Land, also referred to in the past as No Man’s Land. The area was constantly shifting between English and Scottish hands, with the monarchy on either side giving the lands to different people. A definite border was set down in 1552.

The tower is rectangular and measures 10m by 7m It stands three storeys high with walls measuring 1.5m thick. It has a vaulted basement, an internal spiral staircase leading to the upper floors and an embattled parapet.

As can be seen from the timeline below there are some cross-overs of ownership. This is due to the monarchs on either side of the border granting the lands to different families. Also, different sources give different names for the same time period, as in 1272-1300 – the tenant in chief was either Sir John Wake or Baldwin de Wake. It has been a real struggle setting down a timeline that makes some sort of sense, but I think I have done so. Any incorrections are mine and I apologize in advance if there are any.

1298                 The young Thomas Wake was under the Wardship of Piers Gaveston and following his death then went to the household of Queen Isabella, the daughter of the Duke of Lancaster.

1349                 Thomas Wake, son-in-law of Henry of Lancaster, died and his sister inherited his lands. She was married to Edmund Plantagenet, Earl of Kent but died a few weeks later, and the lands should have passed to their son, John, Earl of Kent. However, the lands were never restored to the Wake family.

1552                 A permanent border was drawn up on the Debatable Land, placing Kirkandrews on the English side in Cumberland. The Scotch Dyke marking the extent of the Scottish lands. The tower is depicted on a map of this date.

Although small in size, this site has had a very colourful past and is associated with many high profile people in both England and Scotland. Hopefully more of its history can be discovered in the future as I believe it still holds onto many of its past events.

Anderson. W. 1877. The Scottish Nation: The Surnames, Families, Literature, Honours, and Biographical History of the People of Scotland. Volume 3. A. Fullarton & Company.

Armstrong. R. B. 1883. The History of Liddesdale, Eskdale, Ewesdale, Wauchopedale and the Debateable Land. D. Douglas.

With an Historical Introduction and Appendix, from Authentic Public and Private Documents. William Blackwood & Sons.

Fordyce. W. 1857. The History and Antiquities of the County Palatine of Durham. A. Fullarton and Company.

McDowell. W. 1873. History of the Burgh of Dumfries: With Notices of Nithsdale, Annandale, and the Western Border. Adam and Charles Black.

Pettifer. A. 2002. English Castles: A Guide by Counties. Boydell Press.

Veitch. J. 1893. The History and Poetry of the Scottish Border: Their Main Features and Relations. Volume 2. William Blackwood & Sons.

Whellan. W. 1860. The History and Topography of the Counties of Cumberland and Westmoreland. W. Whellan and Company.