Posted on November 5, 2021 by fortifiedbritain 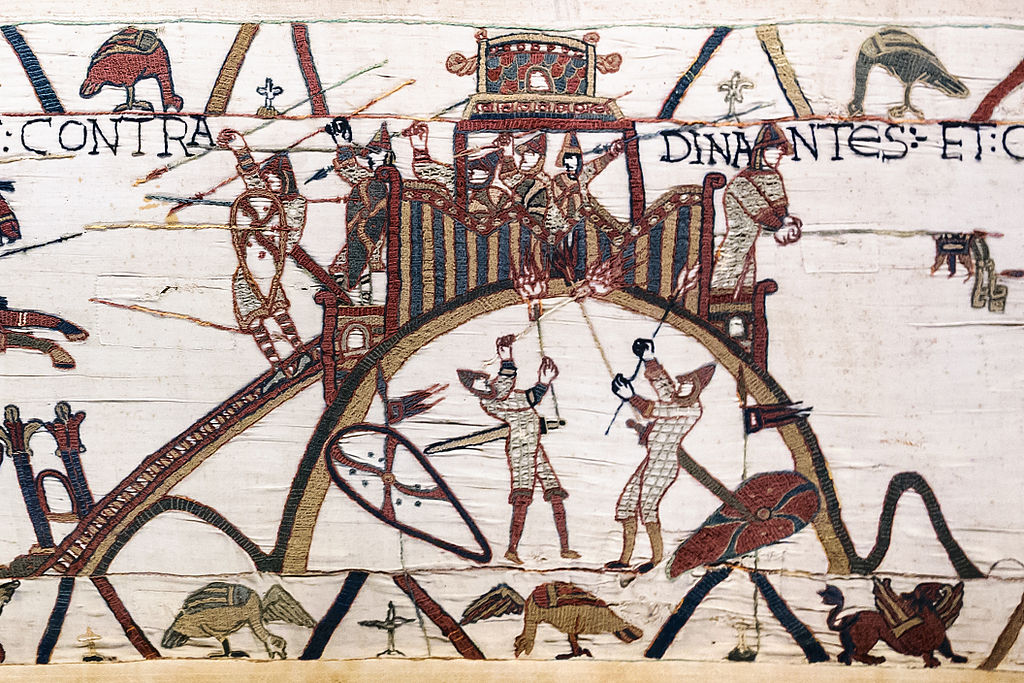 This site is the most systematically excavated timber castle site in Europe. Owing to it never having been ploughed over there is a wealth of archaeological material remaining which was excavated and examined between 1960-1992.

Constructed between 1070-1074 by Roger of Montgomery, 1st Earl of Shrewsbury on land granted to him by William I, the name in Welsh means “Old Mound” and was an important manorial centre which included high status buildings. It is situated at a strategic place near the ford of Rhydwhymanan and includes views along the Severn Valley and the Vale of Montgomery. This timber castle was originally called Montgomery, the name deriving from the hometown of Earl Roger, in France.

The area in which the castle stood is mentioned in the Domesday Book, which states that there was a total of 22 manors that were associated with the castle, and these were held by Roger Montgomery, Roger Corbet and Eilward.

The motte mound measures 8m in height and has a flat summit measuring 6.7m in diameter. The bailey covers an area of 0.13 ha. The whole site was oval in shape and surrounded by two ditches. One is a V-shaped dry ditch measuring 2.7m deep, and there is evidence of another flat-bottomed, wet ditch having surrounded the site, and the archaeology shows that these were re-cut at least 6 times over different periods. Altogether the defences included three ramparts and two ditches. Today, the whole site covers an area of 119.62 m (SW to NE) by 85.05m (NW to SW).

Hen Domen was an important site for Roger Montgomery and he used it as his base for incursions into the Welsh lands that were on its border. At the time the site was located in Shropshire, on the English side. It was one of a chain of fortified sites which sprang up along the Severn Valley in an attempt to subdue the Welsh.

It was constructed over an Anglo-Saxon field systems, which archaeologists have discovered and are researching. It is believed that the land originally belonged to Gruffudd ap Llywelyn prior to William I granting the land to Earl Roger.

As mentioned, Hen Domen is the most systematically excavated timber castle in Europe. Owing to the fact it has never been ploughed over, the archaeological remains are rich and give a true insight into the layout and life of the site.

Timber castles are usually thought to have been simple structures, rapidly constructed with little attention to detail, and only garrisoned by a few retainers. Hen Domen has shown this not to have been the case. It has made us rethink our past evaluations of the timber castle and shows that they were more complex than has originally been thought and understood.

The timber buildings identified at Hen Domen to date include,

Two halls, a chapel, a granary, water cistern, a small house and workshop, and other small rooms tucked into the back of the defences. There was also a structural division across the middle of the bailey, creating an extra line of defence and also a social distinction between the ’upper’ and ‘lower’ halves.’ (Higham 2003).

The structural division is interesting as I believe this is the first time such a division has been discovered – message me below if it is not!

The biggest surprise to come out of the excavations at Hen Domen are the number of buildings which have been uncovered within the bailey. It has generally been thought that there were only a few buildings within timber castle baileys, however, the excavations are showing there were many more and that they were tightly packed together.

All together a total of 50 main buildings and 20 other buildings have been identified dating to the different occupations of the site, and all constructed of timber. It is believed that the buildings were topped with roofs of either shingles of timber or timber planking. This hypothesis comes from some of the archaeological remains where buildings have collapsed in on themselves burying remains of the material possibly used on the roofs.

The motte tower archaeological remains show that it measured 5.5m square, stood at least 2 storeys high, was constructed with square posts, and had at least 7 phases of construction. The archaeological evidence also shows that the tower had been burnt down. This may date from 1095 when the site was sacked and burnt by Cadwgan, as can be seen in the timeline below.

The bridge between the motte and bailey is shown to have been replaced five times, one after the other. This could demonstrate the amount of movement that was going across it and the need for it to be replaced and kept in good repair. The first bridge measured around 3m to 3.7m wide, and the last time the bridge was repaired it was only the width of a single plank which spanned the ditch. Was this through a lack of resources, care or due to the rise in conflict in the area, no time, or manpower, could be spared to reconstruct a complete bridge as had previously been the case? Or is this purely due to New Montgomery Castle being built and they could or would not supply the manpower and materials to rebuild a larger bridge when the site was being replaced. Archaeological evidence has shown, however, that timbers from previous bridges had been reused at each stage of reconstruction.

The best representation of an early timber castle bridge can be seen on the Bayeux Tapestry, and the excavations at Hen Domen show a similar structure.

Here is a timeline for the site.

1095                   Attacked and sacked by Cadwgan Bleddyn, Prince of Powys. ‘In the full current of success Cadwgan rushed to attack the strongest Norman fortress in Wales, Montgomery Castle, which the followers of the Earl of Shrewsbury still possessed. He took it by storm, slew the garrison and burnt it to the ground.

William Rufus, hearing of this event, and aware of its importance, ordered an army to be immediately levied for the invasion of Wales. Michaelmas had passed when he put himself at the lead of that army and marched at one to Montgomery. There he employed his men in the rebuilding of the castle’ (Williams 1869).

c.1102                  Henry III placed Baldwin de Bollers at the castle after banishing the Montgomery lands across England for his treachery in the rebellion against the king. The buildings within the bailey are shown to have been changed at around this time.

1223                       Henry III planned a refortification of the site , however, it was decided to build a new stone castle at a more strategic site a short distance away. Archaeological evidence shows that Hen Domen was still occupied at this date.

The archaeology of the site is very interesting, and as mentioned, has changed our views of early timber castles.

Archaeological phases for the period stretching between the 11th and 14th centuries have been identified. One of the new insights is that of the bailey, once thought to only have a few buildings which housed the retainers of the overlord, has shown at Hen Domen to have been packed with buildings built close together.

Dating of the structural remains shows that the layout of the bailey buildings changed at around 1102. The site took on an administrative as well as a domestic role and locals made up the garrison. At this time there is no evidence of deep post-holes, the buildings were smaller, there were fewer buildings, and a possible chapel with a bell tower. The remains of a possible oval tower have also been uncovered near the bailey entrance.

Between c.1215-1223 the bridge has been found to have been very narrow, only a planks width, and the post holes of the buildings within the bailey were shallow. Alignments of stone have also been uncovered from his time. There is also no evidence that there was a palisade protecting the site. This is around the time that New Montgomery Castle was being built and it may have been decided that the energy and time spent into maintaining the palisade was not worth the effort and all resources were required for the new site.

Other archaeological evidence has shown that there was a palisade near the bridge; that hard clay and stones formed part of the bailey rampart; there may have been an interval tower along defences; a fighting platform was located on top of the rampart; there was a defended gateway to the site; the palisade post holes were fairly deep, and the post-holes were of different sizes, with the posts being 4+ metres in height; clay reinforced the palisade posts.

There is also evidence of a pebbled entranceway, and a pebbled path between two of the major buildings within the bailey near the motte end; the domestic buildings were rebuilt, and some had 2 floors to them; the large hall had an annex on its northern side; and that live animals were kept on site. Archaeologically this information is priceless in our understanding and interpretation of timber castle sites. Reassessment of other timber castle sites is being undertaken in light of this and I look forward to seeing what else can be uncovered!

Finds from Hen Domen include, but are not limited to the following,

It was originally thought that animals were slaughtered before being bought in to such sites, but this is not the case. The evidence has shown that live animals were housed within the bailey, so the garrison had a ready food source. This would be an advantage especially owing to the location of the site and the turbulent times in which it was occupied.

We also see pottery from nearby counties as well. We know the Montgomery’s had sites in these other counties and the de Bollers family had relatives as far away as Yorkshire, so there is little wonder that some items from these areas would have made their way to Hen Domen.

The change in buildings and layout of the bailey is also of interest. The tightly packed buildings would have meant that any breach of the defences would have resulted in very close combat – not ideal within the time or the site.

Owing to the nature of the site, its abandonment, never having been ploughed over, and its good state of preservation, Hen Domen is an archaeological gem. The finds not only give us a better understanding as to the layout and importance of timber castles, but also a greater insight as to the way people lived and worked within them.

Let’s hope that soon, in the near future, more sites can be excavated, research undertaken both here and abroad, and a better understanding of timber castles be uncovered. They truly are amazing sites and totally worth more thorough investigation and research.

Lieberman. M. 2010. The Medieval March of Wales: The Creation and Perception of a Frontier, 1066–1283. Cambridge University Press.