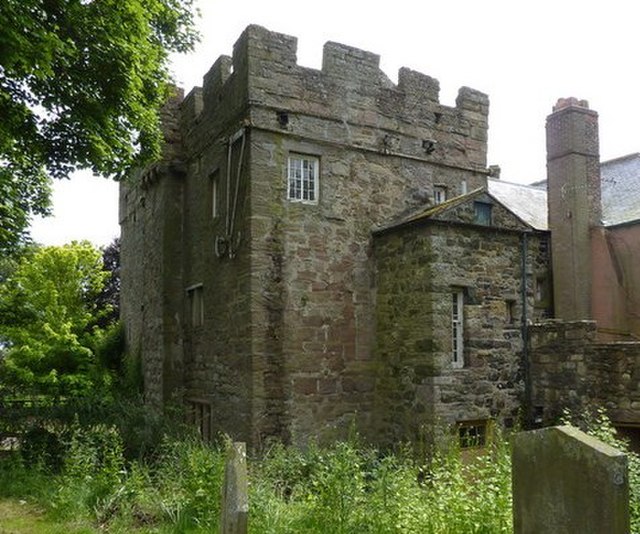 Embleton Tower is a three storey pele tower. It includes two vaulted rooms in its basement, some windows which have been blocked in, and an embattled parapet.

The site is situated near Dunstanburgh Castle and legend states that there is an underground passage between Embleton Tower and the Castle.

It is believed that the tower may have been built on the site of an earlier structure but was reinforced following the Scots raid in 1385. See timeline for more details.

The following statement comes from An Architectural Survey of the Churches in the Archdeaconry of Lindisfarne, and gives a description as to the role some of the pele towers played in the Border battles,

‘I conceive that many of them were used during border forays, as retreats into which the females of the village were received and kept out of sight, the priest, meantime, keeping watch over them, parlaying with the enemy, pleading the respect of the Sanctuary, and arranging the peaceful  cession of the village cattle, or other property, by way of ransom of the people in the tower’. (Wilson 1870).

As with a large number of these sites, there is little recorded history relating to them. I have pieced together the following timeline from the material sourced.

1881                 Mandell Creighton spoke at the Northern Poor Law Conference. He and his wife, Louisa, visited Rome for a third time for research purposes.

The tower is a stunning example of a pele tower. It is private property but can be viewed from the road.

More in-depth information can be sourced from the Historic England entry below in the References.

It was with no light heart that Creighton decided to give up his life at Embleton. We both felt that the ten years we had spent there must remain the happiest of our life…. Our children had had for their early years an ideal country home, which gave them every opportunity for a free and healthy life. The strange charm of Northumberland had won us all, and henceforth no other part of the world could hold our affections in the same way. (Creighton 1904).

Hodges. C. C. 1891. The Pele Towers of Northumberland. The Reliquary and Illustrated Archaeologist: A Quarterly Journal and Review Devoted to the Study of Early Pagan and Christian Antiquities of Great Britain. Volume 5, (New Series),  pp. 1-13.

Jennings. A. 2018. The Old Rectory: The Story of the English Parsonage. Sacristy Press.

Pettifer. A. 2002. English Castles: A Guide by Counties. Boydell Press.

Wilson. F. R. 1870. An Architectural Survey of the Churches in the Archdeaconry of Lindisfarne. M. & M. W. Lambert.