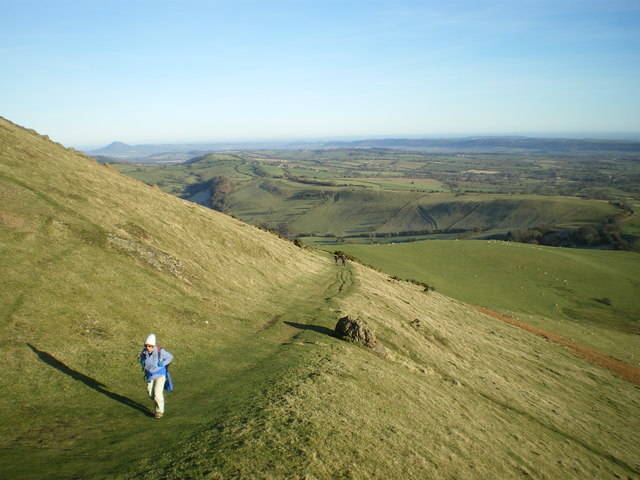 Ramparts – I used to love running up and down them as a child. My parents loved us doing it too. For us it was fun – for them it was a quiet afternoon whilst we slept, exhausted from all the exercise!

These amazing feats of engineering were a necessary part of defence in the Bronze and Iron Ages. They are a length of wall of bank which formed part of the defensive circuit of a site. Most had broad tops for patrolling or for the addition of a timber palisade. And they could be increased in height as and when needed – especially in times of conflict.

Looking at the remains of some of them today you wonder how they may have looked when they were first constructed. Have a look at the following image. Spot the human – I have used them as a scale.

There are four types of rampart associated with hillforts

In a nutshell the glacis rampart is the spoil thrown up out of the ditch as it was dug. Sometimes more soil was added to the height of the rampart to make it more impressive. Ditches were dug deeper to make the rampart higher.

This way there was a continual 30 – 450 angle from the base of the ditch to the top of the earthen rampart.

Ramparts of this type are dated to the middle Iron Age (4th – 2nd centuries BC).

Examples of this type of rampart are Maiden Castle and Hid Hill, two of the largest hillforts in England.

A timber box rampart is also as its name suggests – a box. Wooden stakes where knocked into place which formed crude boxes. These were then filled either with stone or earth, whichever was available at the time, timber lacing was placed within the fill to ensure the strength of the rampart.

The following image is a reconstruction of a European box rampart – but it gives a great idea as to how they may have looked when completed – minus the rail on top of course!!

An example of the remains of box ramparts can be seen at the Old Oswestry hillfort.

As it name suggests, a dump rampart is a large ‘dump’ of soil or stone placed just back from the edge of the ditch cut. The ditch that accompanied it included a wide, flat bottom.

This type of rampart was introduced to Britain at around the 1st century AD .

These ramparts, although they may appear to have been easier to build would in fact have taken just as much manpower as the others. Sourcing, collecting, designing and constructing the ramparts would have taken time, energy and commitment.

As with the above-mentioned box ramparts, the stone ramparts would also have had timber lacing to give added strength.

The manpower, time and resources to erect and maintain these amazing sites would have been huge, and shows there was a level of social structure and working towards a bigger cause even back in those days!

Brown. I. 2009. Beacons in the Landscape: The Hillforts of England and Wales. Barnsley, S. Yorks: Windgather Press.

Cunliffe. B. 2004. Iron Age Communities in Britain: An Account of England, Scotland and Wales from the Seventh Century BC Until the Roman Conquest. Oxon: Routledge.

Pryor. F. 2010. The Making of the British Landscape: How We Have Transformed the Land, from Prehistory to Today. London: Penguin UK.